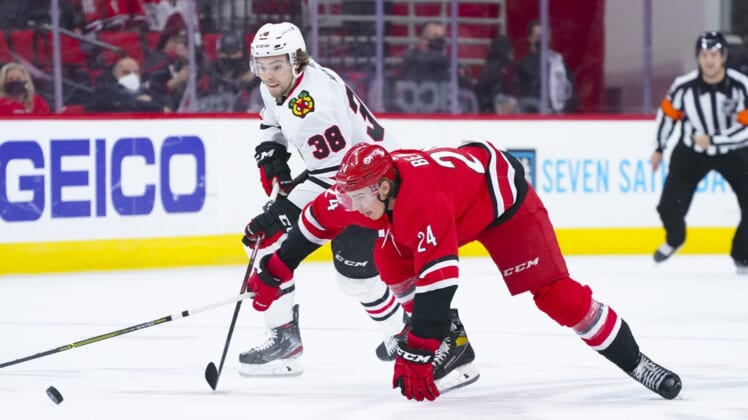 Andrei Svechnikov and Nino Niederreiter each scored two goals and the Carolina Hurricanes responded from a two-goal deficit to defeat the Chicago Blackhawks 6-3, stretching their points streak to 12 games Tuesday night in Raleigh, N.C.

Niederreiter and Svechnikov scored in the second period for the Hurricanes before the team’s four-goal third period. Svechnikov broke a tie and Teuvo Teravainen’s goal gave the Hurricanes a 4-2 lead. After a Chicago goal from Alex DeBrincat, Martin Necas scored on a short-handed empty-net goal before Niederreiter’s empty-netter capped the scoring.

Svechnikov also had an assist and Sebastian Aho and Teravainen posted two assists apiece for Carolina (36-10-7, 79 points), which has won five games in a row.

Carolina goalie Petr Mrazek, who was in his first game since April 19 following another injury, made 27 saves. His record improved to 6-1-2, with his only regulation setback in the second game of the season.

The teams will meet for the third time in four nights when Carolina concludes its regular-season home schedule Thursday night.

DeBrincat’s second goal came with 8:08 to play, pulling the Blackhawks to within 4-3.

Then with Carolina’s Jordan Staal in the penalty box, the Blackhawks pulled Delia.

DeBrincat opened the scoring less than 6 1/2 minutes into the game. That gave him his second four-game goals streak of the season.

Hardman’s goal came later in the period. MacKenzie Entwistle assisted on the play, giving each of the duo his first NHL point. That hadn’t happened with two Chicago players notching their first points on the same sequence since October 2007.

Playing in games on back-to-back days, the Hurricanes improved to 7-2-0 this season in the second of those games.