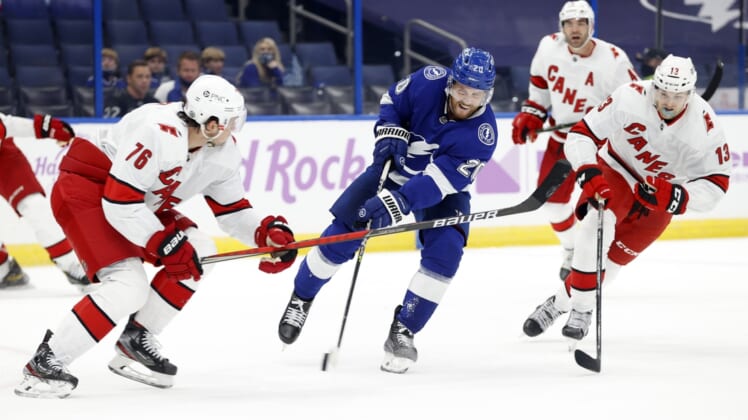 Nino Niederreiter notched a goal and an assist in Carolina’s three-goal second period Tuesday night as the Hurricanes beat the host Tampa Bay Lightning 4-1 to split their back-to-back set.

Jordan Staal, Steven Lorentz and Jordan Martinook found the net for the Hurricanes, who are 6-1-2 in their last nine games and won for the just the second time in their last 14 in Tampa.

Alex Nedeljkovic (11-4-2) allowed one goal on 27 shots to win his third straight start and move to 2-1-0 against the Lightning.

Tampa Bay got markers from Brayden Point — who scored in his third straight game — and 32 saves on 35 shots from Andrei Vasilevskiy (27-8-1).

The Hurricanes started faster than in Monday’s 3-2 overtime loss — outshooting Tampa Bay 8-1 early in the first period — but both goalies were solid, including Vasilevskiy when he got a piece of Vincent Trocheck’s one-timer with 38 seconds left.

Each club was slow to leave the ice in the feisty frame’s finish after Lightning defenseman Mikhail Sergachev slashed Trocheck as the buzzer sounded with the center possessing the puck at the red line.

In the second period, the edgy play continued — Martinook and Tampa Bay’s Barclay Goodrow fought at center ice after a puck-drop — but the Hurricanes scored two even-strength goals 25 seconds apart around the scrap to take a 2-0 lead.

Trocheck led a quick breakout from the Carolina end and eventually fired a pass into the slot for Niederreiter. The Swiss left winger then buried his 16th goal at 7:48.

Staal quickly made it 2-0 when he redirected in a long shot by Dougie Hamilton as all the momentum seemed to be with the visiting side.

Some hard work by fourth-liner Morgan Geekie in the corner to Vasilevskiy’s left resulted in Lorentz’s second goal, but Point chipped in his team-leading 20th tally just 18 seconds later as the teams ended the period with Carolina holding a 3-1 advantage.

With five minutes remaining in regulation, the Lightning had chance to cut it to one goal on a power play and later with the extra skater on, but Martinook’s empty-netter with three seconds left sealed the win.

Both teams finished the season series with a 4-3-1 record.