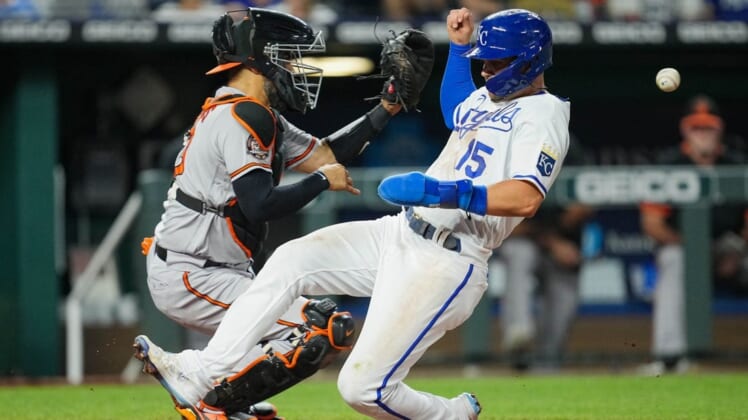 Carlos Santana hit a 423-foot home run to break a 4-4 tie as the Royals defeated the Baltimore Orioles 7-5 Thursday night in Kansas City in the first game of a four-game series. The Royals won back-to-back games for the first time since May 17-18.

Joel Payamps (2-1) was the winning pitcher in relief. Scott Barlow earned a four-out save, his sixth.

The Orioles scored first in the top of the third. Jorge Mateo singled and stole second. He went to third on an error. Trey Mancini then bounced a one-hopper to shortstop and Mateo beat the throw.

The Royals came right back with a big bottom of the inning. Whit Merrifield led off with a single. With one out, Witt doubled down the line, sending Merrifield to third. Salvador Perez then drove both runners home with a single. MJ Melendez then launched a 418-foot home run to right field, putting the Royals up 4-1.

It marked the first time this season that Kansas City’s fourth- and fifth-place hitters combined for at least four RBIs.

Baltimore tied the game in the fifth. With one out Cedric Mullins doubled and went to third on a single by Mancini. Austin Hays drove in Mullins with a single, ending Royals’ starter Kris Bubic’s night. Ryan Mountcastle then greeted reliever Collin Snider with a two-run double.

The Royals didn’t let the game stay tied for long. Melendez walked leading off the fifth. Santana, who had his first four-hit game of the season Wednesday, hit his third home run of the season beyond the bullpen in right field.

Witt then drove in Merrifield with a sacrifice fly in the sixth.

The Orioles got one run in the eighth on a Mullins double. But after Mancini walked to load the bases, Barlow got Austin Hayes to ground out ending the threat.