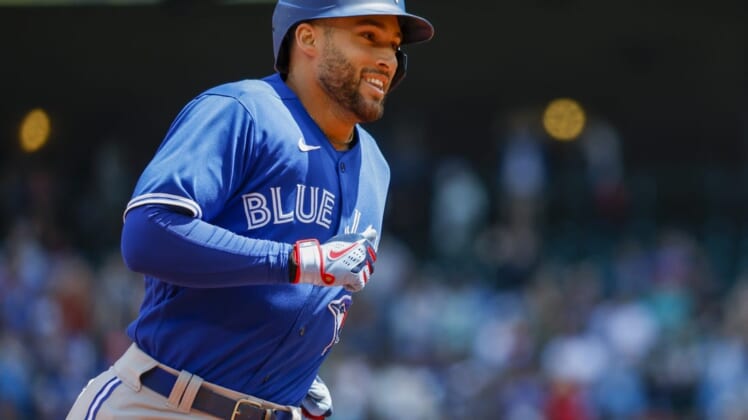 Carlos Santana homered twice, the latter a two-run shot in the eighth inning to put Seattle ahead, as the Mariners completed a four-game sweep of the visiting Toronto Blue Jays with a 6-5 victory Sunday afternoon.

The Mariners won their eighth consecutive game to pull even with Toronto for the American League’s third and final wild-card playoff berth.

George Springer, Raimel Tapia and Bo Bichette homered for the Blue Jays, who lost for the eighth time in their past 10 games. Bichette’s solo shot to left-center field in the seventh broke a 4-4 tie.

In the bottom of the eighth, J.P. Crawford hit a high popup just in front of the plate that was dropped by catcher Gabriel Moreno for an error. Santana, who led off the second inning with a solo shot and hit a two-run blast Saturday night in a 2-1 Mariners victory, hit an 0-2 pitch from Adam Cimber (8-3) over the right-field wall to make it 6-5.

Matt Festa (1-0) pitched a scoreless inning of relief for his first major league victory and Paul Sewald worked the ninth for his 10th save of the season.

Springer hit the game’s first pitch from Logan Gilbert over the left-field wall.

After Santana tied it, Tapia gave the Blue Jays a 2-1 lead with a solo shot with two outs in the fourth.

Toronto extended its lead to 4-1 in the fifth. Moreno grounded a leadoff single to right and, after Cavan Biggio hit into a fielder’s choice, Springer doubled to left. With runners at second and third and the infield drawn in, Bichette grounded a two-run single to center.

The Mariners responded with two runs in the bottom of the inning. Cal Raleigh and Adam Frazier singled with one out, ending Max Castillo’s first major league start. David Phelps walked Justin Upton to load the bases before getting Sam Haggerty to ground back to the mound. Phelps threw home for a forceout but Moreno’s throw to first to complete the double play broke through the webbing of Vladimir Guerrero Jr.’s glove, allowing Frazier to score from second and leaving runners at the corners. Julio Rodriguez’s infield single scored another unearned run to make it 4-3.

The Mariners tied it in the sixth off Tim Mayza. With one out, Santana was hit by a pitch and took second on a wild pitch. Eugenio Suarez’s grounder back to the mound went off the end of Mayza’s glove for an infield single, moving Santana to third. Raleigh’s sacrifice fly to center made it 4-4.