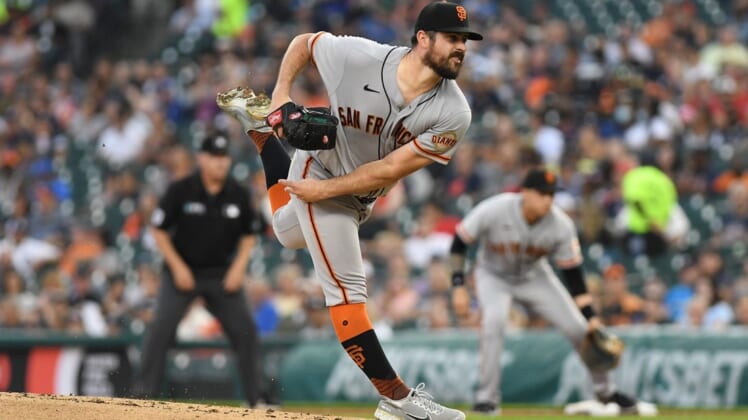 Evan Longoria homered for the second consecutive game, Carlos Rodon struck out 10 in seven innings and the visiting San Francisco Giants held off the Detroit Tigers 3-1 on Tuesday.

Longoria, who blasted a grand slam against the Colorado Rockies on Sunday, clubbed a two-run homer in the sixth. Joc Pederson reached base three times, drove in another and scored a run for the Giants, who have won two in a row after a four-game losing streak.

Rodon (12-6) limited the Tigers to one run on five hits and no walks. He produced a double-digit strikeout total for the eighth time this season and his second start in a row.

Giants reliever John Brebbia tossed a 1-2-3 eighth inning, and Camilo Doval survived a bases-loaded situation in the ninth for his 18th save.

Eric Haase drove in the lone run for the Tigers, who had won four of their previous six games. Detroit’s Javier Baez and Riley Greene added two hits apiece.

Tigers starter Drew Hutchison (1-7) gave up one run and four hits in five innings. He walked two and fanned three.

The Giants scored in the first inning. Tommy La Stella singled to lead off the game and Lamont Wade Jr. walked. Wilmer Flores bounced into a double play before Pederson lined an RBI single to right.

Greene led off the bottom of the inning with a single but was quickly erased on a double play.

San Francisco had another threat going in the fourth when Pederson and Longoria hit one-out, back-to-back singles. Brandon Crawford and Thairo Estrada then lined out.

Detroit didn’t have another baserunner until Harold Castro slapped a two-out single in the fifth. Rodon then struck out Willi Castro.

San Francisco increased its lead to 3-0 in the sixth against Daniel Norris. Pederson drew a two-out walk before Longoria hammered his 12th homer of the season over the left field wall.

The Tigers broke up Rodon’s shutout bid in the seventh. Baez hit a leadoff single, stole second and scored on Haase’s single.

Detroit’s Victor Reyes hit a one-out double in the ninth and moved to third on a passed ball. Baez reached on an infield single as Reyes retreated to third. Doval then walked Haase on four pitches to load the bases.

Doval recovered by striking out Miguel Cabrera looking and retiring Harold Castro on a ground ball to first base.