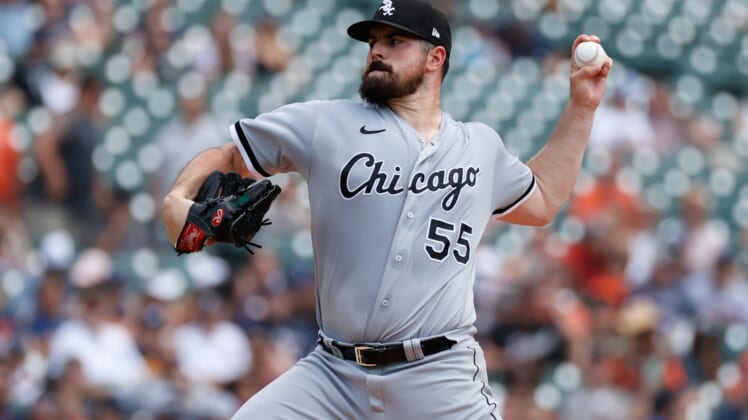 Carlos Rodon flirted with his second no-hitter of the season and the Chicago White Sox completed a three-game weekend series sweep by downing the host Detroit Tigers 4-1 on Sunday.

Rodon (6-2), who tossed his no-hitter against Cleveland on April 14, didn’t allow a hit until Eric Haase’s one-out double in the seventh. Rodon issued two-out walks to Isaac Paredes in the second and
Robbie Grossman in the sixth. He struck out nine and came out after seven innings.

Liam Hendriks got the last three outs for his 17th save.

The White Sox scored the first run in the fourth. Yoan Moncada doubled down the left-field line off Tyler Alexander (0-1). Abreu ripped an opposite-field single to bring Moncada home.

Rodon struck out Daz Cameron, Miguel Cabrera and Haase in the bottom of the inning.

Chicago added a run in the fifth. Danny Mendick had a one-out single to right and scored when Garcia smacked an Alexander changeup for a double to left.

Rodon recorded strikeouts of Niko Goodrum and Willi Castro, sandwiching a flyout, in the fifth.

The White Sox extended their lead to 4-0 in the sixth against Buck Farmer. Abreu led off with a single and Adam Eaton reached on an infield hit one out later. Adam Engel was hit by a pitch to load the bases. Farmer struck out the next batter, then hit Mendick on the arm with a changeup, bringing in Abreu. Garcia walked on four pitches, allowing Eaton to score.

Rodon’s bid to pitch multiple no-hitters ended in the bottom of the seventh. After Rodon struck out Cabrera again, Haase hit a liner to left that just eluded the glove of Andrew Vaughn. A wild pitch and Goodrum’s sacrifice fly put the Tigers on the board.