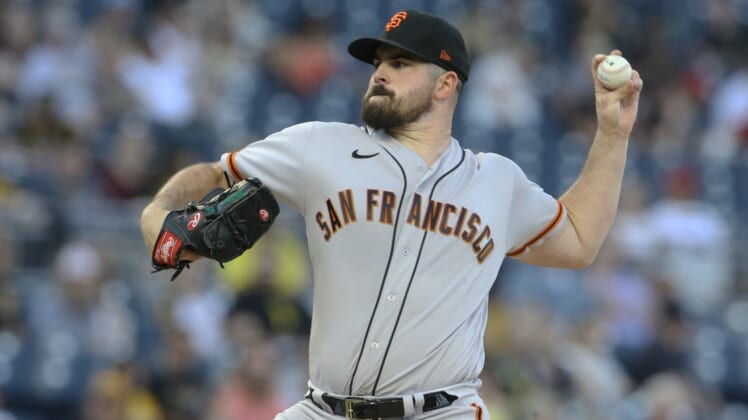 Rodon (6-4) gave up two hits, both singles, struck out eight and walked two. Camilo Doval pitched a one-two-three ninth to sew up the shutout and earn his 10th save.

The Giants have won six of their past seven games. The Pirates have lost 10 of 11.

Gonzalez led off the game with his third homer, to right, to give San Francisco a 1-0 lead.

Thompson got into a jam in the second. Brandon Belt doubled off the wall in center, Thairo Estrada walked and Tommy La Stella singled to right to load the bases with no one out. Thompson got out of it by striking out Brandon Crawford and getting Austin Wynns to hit into a double play.

In the fourth, it was Pederson’s turn to lead off an inning with a homer, this one his 14th, to right field to push the Giants’ lead to 2-0.

Going into the bottom of the fifth, Pittsburgh’s only runner was Daniel Vogelbach, who walked to lead off the second. With two outs in the fifth, Jack Suwinski negated any thoughts of a no-hitter when he stroked a base hit to center. Yu Chang followed with a walk — the only time the Pirates had a runner reach second — but Rodon struck out Cal Mitchell.

Ke’Bryan Hayes came up with the Pirates’ second hit, a one-out single up the middle in the sixth, but he got stranded when Bryan Reynolds struck out and Michael Chavis grounded into a fielder’s choice.

Rodon had a seven-pitch, one-two-three seventh.