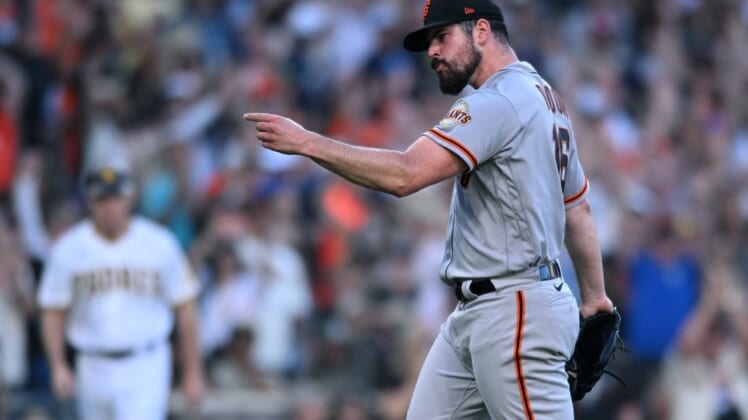 Wilmer Flores hit a two-run homer off Padres reliever Luis Garcia with one out in the eighth inning Saturday afternoon to give the visiting San Francisco Giants a 3-1 win in San Diego, snapping a string of five straight Padres wins against the Giants.

Starting pitchers Carlos Rodon of the Giants and Yu Darvish of the Padres had brilliantly battled to a 1-1 draw through seven innings.

Rodon (8-5) pitched the third complete game of his career and retired 22 straight Padres before Luke Voit drew a four-pitch walk with two out in the ninth. Rodon then struck out Jorge Alfaro for the final out — and his 12th strikeout of the game.

Garcia (4-5) opened the eighth and retired the first hitter he faced on a grounder. The right-handed reliever then walked starting National League All-Star left fielder Joc Pederson, bringing up Flores.

The Giants’ second baseman fell behind on two straight strikes, followed by a ball and a foul. Flores then hit a hanging slider from Garcia 378 feet into the third row of seats in left. It was Flores’ 10th homer of the season.

Both teams scored in the second and blew an opportunity for more.

Brandon Belt doubled to the base of the wall in right-center to open the Giants second. Luis Gonzalez then drew a walk from Darvish and David Villar singled to center to load the bases. Belt scored on Brandon Crawford’s sacrifice fly to left, and Gonzalez and Villar advanced to third and second when the throw bounced past catcher Austin Nola. But Darvish retired Mike Yastrzemski on a foul pop to third and got Austin Wynns to ground out to end the inning.

Alfaro and Nola singled to open the bottom of the third. After Brent Rooker struck out in his first plate appearance of the season, Trent Grisham singled to load the bases. Alfaro scored when Jose Azocar’s sharp grounder to first bounced away from Belt for an error. Ha-Seong Kim then grounded into a bases-loaded double play to end the inning.