Carlos Carrasco strikes out 11 as Mets cruise past Pirates 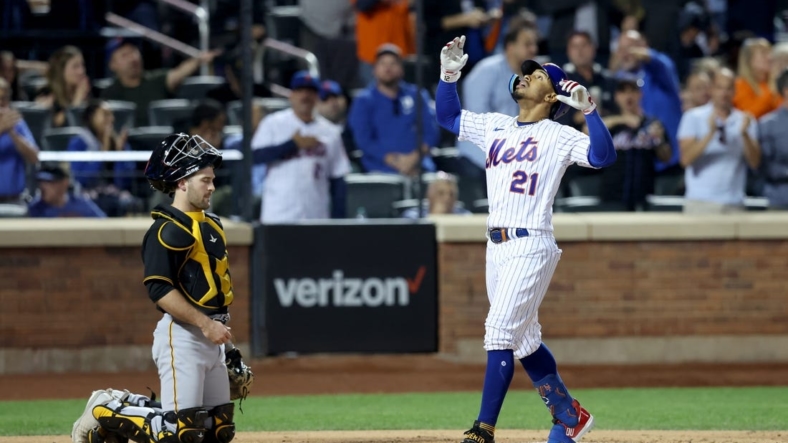 Carlos Carrasco struck out a season-high 11 batters over six innings and New York Mets designated hitters accounted for four RBIs Thursday night in a 7-1 win over the visiting Pittsburgh Pirates.

The Mets (90-55) snapped a three-game losing streak — tied for their longest of the season — and increased their lead to one game over the idle Atlanta Braves in the National League East.

The loss ended a four-game winning streak — tied for their highest of the season — for the Pirates (55-89), who were trying to win five straight for the first time since April 2019.

Carrasco (15-6) allowed one run on four hits — including an RBI single by Michael Chavis in the second — and two walks. He recorded his first seven outs via the strikeout and finished with his most whiffs since he struck out 12 batters for Cleveland on Apr. 17, 2019.

The Mets provided Carrasco the only runs he’d need with a two-out rally against JT Brubaker (3-12) in the first. Jeff McNeil and Pete Alonso each singled before scoring on a double by designated hitter Daniel Vogelbach.

The Mets scored three more runs in the third, when Brandon Nimmo drew a leadoff walk and scored on Francisco Lindor’s homer. The blast was the 24th of the season for Lindor, setting a team record for most homers by a shortstop and breaking a tie with Asdrubal Cabrera (2018). The two RBIs gave Lindor a career-high 94, exceeding the 92 RBIs he had for Cleveland in 2018.

Rookie Mark Vientos, pinch-hitting for Vogelbach in the fourth, delivered an RBI single for his first career hit. Mets designated hitters had just four RBIs in the team’s previous 20 games.

Chavis and Bryan Reynolds had two hits for the Pirates.

Brubaker allowed five runs on seven hits and two walks while striking out five over three innings. He exited with right lat discomfort.