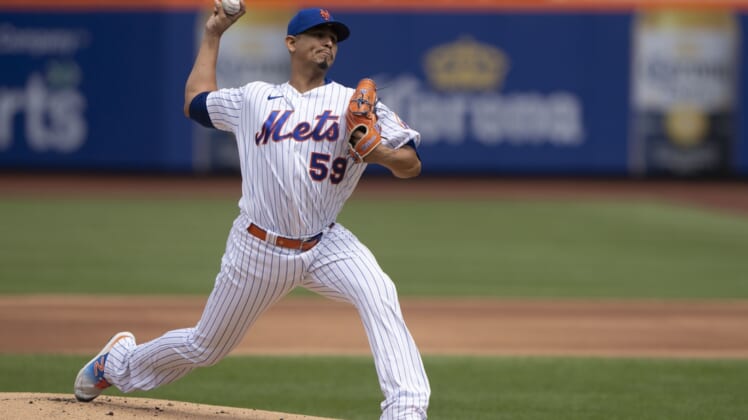 Francisco Lindor, who joined the Mets from the Cleveland Guardians in the same trade as Carrasco, homered and collected three hits.

Eduardo Escobar also homered as the Mets took three of four from the defending NL West champions. Tomas Nido lifted a sacrifice fly and Mark Canha added a two-run single in his second game back from the COVID-19 injured list.

Brandon Nimmo contributed an RBI single for the Mets, who collected 12 hits.

Thairo Estrada hit an RBI single and Mike Yastrzemski homered for the Giants, who dropped to 4-3 on an 11-game road trip and lost Steven Duggar to an oblique injury.

Carrasco (1-0) pitched into the eighth for the first time since May 4, 2019, when he also pitched 7 2/3 innings against the Seattle Mariners. He allowed two runs on four hits, struck out seven and issued no walks in a 91-pitch outing.

Carrasco allowed his first three hits within the first two innings and then retired 18 straight before Mauricio Dubon reached on an error to lead off the eighth. After inducing a double play by Curt Casali, he allowed a homer to Yastrzemski and exited to a nice ovation from the crowd.

Joely Rodriguez got the final out of the eighth and Edwin Diaz finished up with a perfect ninth.

The Mets went ahead two batters into the game when Lindor drilled a 1-0 fastball to right field. After San Francisco tied it on Estrada’s single with nobody out in the second, the Mets scored two runs apiece in the second and third.

Escobar snapped the tie by lining an 0-1 changeup to right field to open the second, and Travis Jankowski scored on Nido’s fly ball after reaching third on a hit-and-run single by Luis Guillorme.

The Mets opened a 5-1 lead when Canha drilled a two-out single to left over the leaping try of former New York third baseman Wilmer Flores.