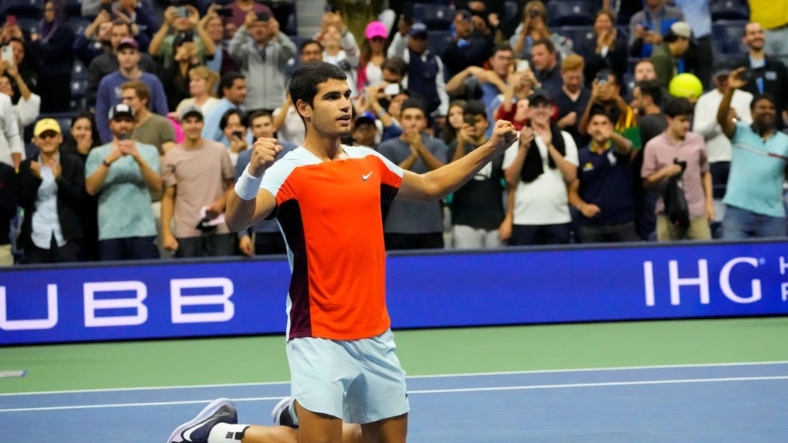 Carlos Alcaraz is the late-night king of New York.

“Honestly I still don’t know how I did it, the level that I played, the level of the match, the high quality of tennis,” Alcaraz said. “It’s unbelievable, the match today. Jannik Sinner is a great player, as everybody could see. His level is just amazing.”

The Alcaraz-Sinner marathon was the second-longest match ever at the U.S. Open, trailing only a 5-hour, 26-minute win by Sweden’s Stefan Edberg over the United States’ Michael Chang in 1992.

Alcaraz, 19, is headed to a major semifinal for the first time. The highest seed left in the field, he next will oppose the United States’ Frances Tiafoe, who beat ninth-seeded Andrey Rublev of Russia 7-6 (3), 7-6 (0), 6-4.

The other semifinal will feature No. 5 Casper Ruud of Norway and No. 27 Karen Khachanov of Russia. If either Alcaraz or Ruud wins the championship, or if only one of the two reaches the final, that player would move to No. 1 in the world. If neither gets to the championship match, Spain’s Rafael Nadal would go back to No. 1.

Alcaraz would become the youngest top-rated player since the ranking system began in 1973. The mark is currently held by Australia’s Lleyton Hewitt, who was 20 when he reached the No. 1 spot in 2001.

On Wednesday, Sinner was on the verge of going down two sets to none when he saved five set points — four on his own serve at 5-6 and one at 6-7 in the second-set tiebreaker. However, he won the last three points in the tiebreaker to level the match.

Alcaraz also failed while serving for the third set at 6-5, ultimately losing every point in that set’s tiebreaker.

Asked how he reversed the momentum when Sinner had match point on his own serve at 5-4 in the fourth set, Alcaraz said, “I always say you have to believe in yourself all the time. The heart is the last thing that you lose. I just believed in myself, believed in my game. I knew that to close a match is really difficult in this … round.”

Looking ahead to his semifinal matchup, Alcaraz said, “Everyone loves the level of Tiafoe. He beat (Nadal), he beat Rublev in three sets. He plays really good. He has a lot of confidence right now, obviously. … It’s going to be a really, really tough match.”