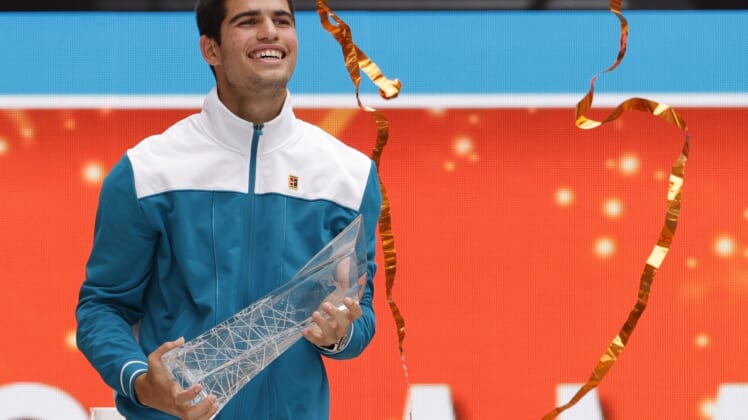 The 18-year-old now has three career titles, but the Miami victory is his first ATP Masters 1000 win. And he achieved something his Spanish compatriot, Rafael Nadal, never has done.

“I have no words to describe how I feel right now I feel,” Alcaraz said after the match. “It’s so special to win my first Masters 1000 here in Miami. I have an unbelievable team with me. … I’m so happy with the win and my team.”

Ruud, the sixth seed, jumped out to a 4-1 lead in the first set, but Alcaraz clawed back, breaking Ruud in two of the Norwegian’s next three service games to take a 6-5 lead and serve out for the set.

Riding the momentum, Alcaraz jumped out to a 3-0 lead in the second set, breaking Ruud’s serve twice again, on his way to closing out the match. He won 75 percent of points on his first serve in the match, compared to 60 percent for Ruud.

At 18 years and 333 days old, Alcaraz became the youngest man to win in Miami is the 37-year history of the event, and the third-youngest to win an ATP Masters 1000 champion overall. Only Michael Chang (Toronto 1990) and Nadal (2005 Monte Carlo) were younger.

“I knew that Casper is playing unbelievable. He has a big forehand. I tried to play to his backhand first and attack all the time,” Alcaraz said of his strategy. “I tried not to let him dominate the match. Forehand down the line, backhand down the line was a key for me.”

Alcaraz will climb five spots to No. 11 when the new ATP rankings are released on Monday.

Ruud, ranked No. 8, was competing in his 10th ATP Tour final and seeking his eighth title. The 23-year-old won earlier this year in Buenos Aires.