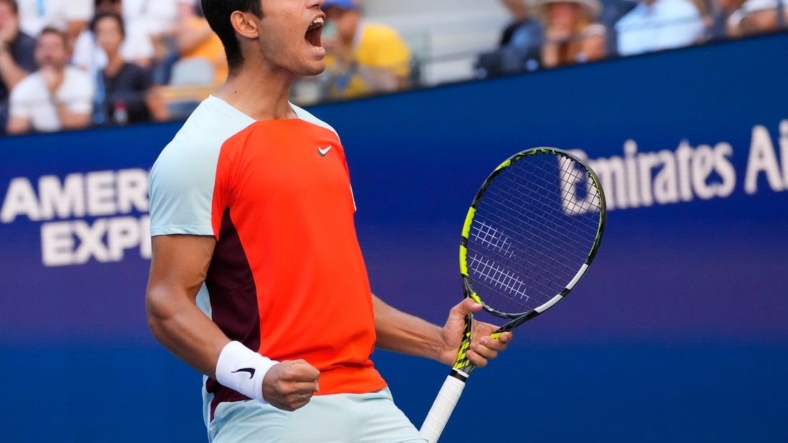 Spanish teen Carlos Alcaraz had a 46-15 edge in winners on his way to handling Federico Coria of Argentina 6-2, 6-1, 7-5 on Thursday in second-round action at the U.S. Open in New York.

Alcaraz, the third seed, also hit four aces to Coria’s none and saved 13 of 14 break points to cruise into a third-round match against American Jenson Brooksby.

The 19-year-old won his 46th match of the ATP season, tying Stefanos Tsitsipas of Greece for the lead. He also could rise to No. 1 in the world rankings if he reaches the championship match, depending on other results.

“It has been a great year for me,” Alcaraz said. “I think I am playing very well. I am so happy to be the player who now has the most victories in the year, but I have to look forward and stay the same player and go for it.”

Brooksby won a lengthy second-set tiebreaker to knock out No. 25 seed Borna Coric of Croatia 6-4, 7-6 (10), 6-1. Coric had come to New York off a title run at the Western & Southern Open last month.

No. 11 Jannik Sinner of Italy, No. 14 Diego Schwartzman of Argentina and No. 15 Marin Cilic of Croatia all won in straight sets as well.

Brandon Nakashima won two close sets en route to a 7-6 (5), 7-5, 6-3 upset of Bulgarian 17th seed Grigor Dimitrov. The 21-year-old American reached the third round of the U.S. Open for the first time by winning 56 of 70 first-service points (80 percent) and saving all of the five break points he faced.

“Playing against (Dimitrov), it’s always going to be tough,” Nakashima according to the Los Angeles Times. “You’re always going to have to fight for every point … I’m happy with the level I’m playing at and I feel pretty confident right now.”

Three more matches were scheduled to round out the night. Eighth-seeded Hubert Hurkacz of Poland was playing Ilya Ivashka of Belarus, No. 22 seed Frances Tiafoe of the U.S. was playing Jason Kubler of Australia and No. 2 seed Rafael Nadal of Spain was slated to face Fabio Fognini of Italy in primetime.