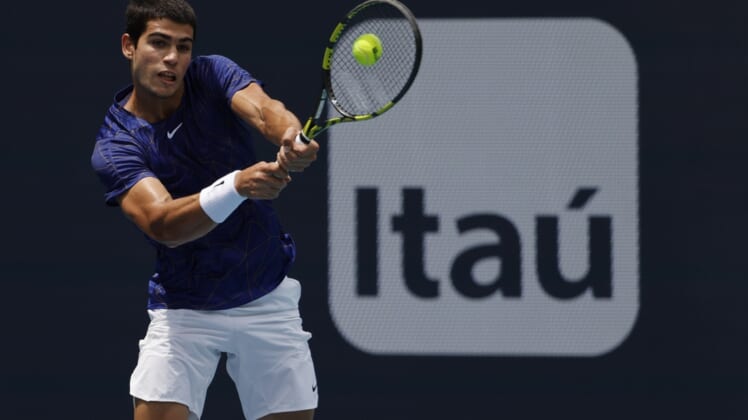 Rising teen Carlos Alcaraz upset one tennis legend on Friday and earned the right to face another on Saturday.

Next up for Alcaraz, who turned 19 on Thursday, is a semifinal against top-seeded Novak Djokovic. The Serb rolled past 12th-seeded Hubert Hurkacz of Poland 6-3, 6-4.

The Friday victory was history-making for Alcaraz, who became the first teen ever to register a clay-court win against Nadal. A year ago, when Alcaraz was ranked 120th in the world, he fell 6-1, 6-2 to Nadal in the second round at Madrid.

Even after Nadal dominated the second set to level the match, Alcaraz remained calm, recording the only service break of the final set in the fourth game. Alcaraz never faced a break point in the third set.

“When I lost the second set, I (just) thought that I was able to come back, to do my best, try everything on court, fight until the last ball,” Alcaraz said. “It was the key.”

Alcaraz had also lost to Nadal in the semifinals at Indian Wells, Calif., in March. He subsequently produced championship runs in Miami and Barcelona. Alcaraz and Djokovic have never faced off before.

Djokovic never faced a break point and won 81 percent of his first-serve points in a comfortable victory against Hurkacz.

“I was serving really well in the second set, I think that kept me alive,” said Djokovic, a three-time Madrid champion. “I was pleased with the way I was constructing points. I tried to make him run and miss and overall It was a solid performance.”

The other semifinal will feature second-seeded Alexander Zverev of Germany and fourth-seeded Stefanos Tsitsipas of Greece.

When Tsitsipas served for the match in the final game, Rublev had two break points to pull even at 5-5, but Tsitsipas held on.

“It’s never easy playing him, and I really had to survive that last game with my best strength and give out my soul, pretty much, to finish it in such a good way,” Tsisipas said.