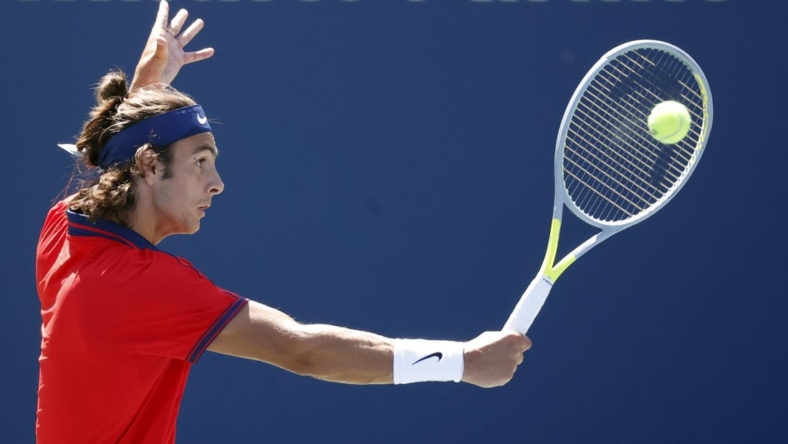 World No. 1 Carlos Alcaraz of Spain needed just 72 minutes to defeat Bulgaria’s Grigor Dimitrov 6-1, 6-3 and advance to the quarterfinals of the Rolex Paris Masters on Thursday in France.

“At the end of the second set, it was tougher for me,” Alcaraz said. “(Dimitrov) came back, he raised the level and obviously it was tough. He had the chance to go up in the second set, I had to stay calm in that moment and show my best to not allow him to go up.”

Next up, Musetti will face No. 6 seed Novak Djokovic. The Serbian won his 11th straight match by taking down Russian Karen Khachanov 6-4, 6-1.

“He’s so talented,” Djokovic said. “He’s got everything in his game. He can play in the court, he can defend well, he’s got great movement, but I know his game well and I’m looking forward to a good challenge.”

Denmark’s Holger Rune upset No. 7 seed Andrey Rublev of Russia 6-4, 7-5. Rune saved all six points he faced and won 30 of his 40 first-service points (75 percent). Rune will draw Alcaraz in the quarterfinals.

Simon was grateful to reach the third round while playing on his home soil — and to retire on his own terms, not forced out by past injuries.

“I just feel so lucky to have been a tennis player. It’s what I have always wanted to be,” Simon said after the match. “I was a professional tennis player for a long time, and that’s why I was lucky twice and I could stop when I wanted, and so I have been lucky three times.”

Tiafoe will face Auger-Aliassime in the quarters while Paul will face Tsitsipas.