The Indiana Pacers have essentially quit on their coach, and now will proceed through the NBA play-in tournament without Caris LeVert.

According to The Athletic’s Shams Charania, LeVert will miss Tuesday’s play-in matchup against the Charlotte Hornets:

An already watered-down duel is going to be even worse without LeVert, a dynamic wing who averaged 20.7 points per contest in 36 games this season for Indiana.

LeVert was out indefinitely once he landed with the Pacers due to kidney cancer that required surgery. His comeback story was inspiring amid an otherwise underwhelming, losing season in Indiana, which may bring about a coaching change soon. 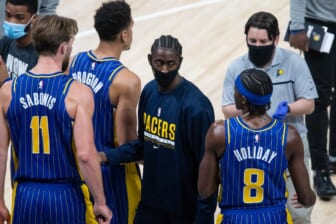 Also Read:
Indiana Pacers’ Caris LeVert to return from cancer in second half of NBA season

Indiana Pacers destined for early exit with or without Caris LeVert

The ceiling for this Pacers squad was always going to be limited, and even more so with LeVert out of action.

However, it may actually be a blessing in disguise. Not only does LeVert risk further injury by trying to press through and play, but the sooner Indiana exits the NBA playoffs, the sooner they can move on from head coach Nate Bjorkgren.

Thanks to a classic Woj Bomb, we know that Bjorkgren doesn’t get along with several players, much less his own staff. Unless the Pacers go on a miraculous playoff run, why bother keeping him?

The NBA play-in tournament is rather gimmicky to begin with, and the truth is, the Pacers have a much more talented core than their 34-38 record would suggest.

With Domantas Sabonis, Malcolm Brogdon, Myles Turner and LeVert, the right coaching leadership could work wonders for Indiana in the years to come.

But first, the players have to battle through this latest bout of adversity, continue to stick together, and hope that next season brings about a fresh voice in the locker room they can all rally behind to realize their immense collective potential.