Careening Cardinals try to get back on track vs. Cowboys 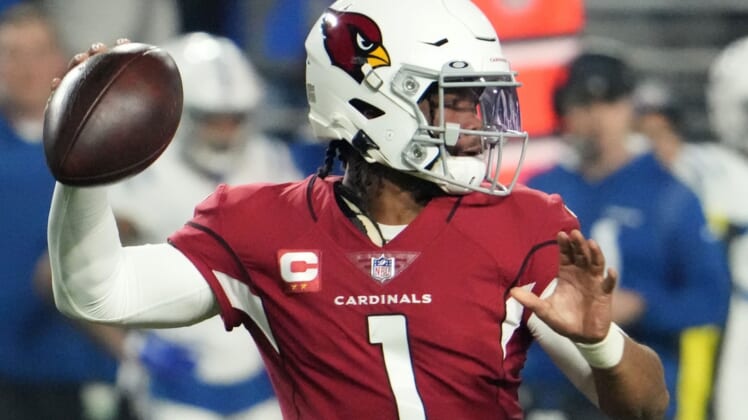 The Arizona Cardinals were the last NFL team to lose a game this season, but they currently possess the fifth-best record in the NFC.

The team that rolled off seven straight wins is now filled with question marks. The Cardinals (10-5) will search for their early-season form when they face the Dallas Cowboys (11-4) on Sunday at Arlington, Texas.

While Dallas has won four straight games, Arizona will be attempting to snap a three-game losing streak. The latest setback was against the Indianapolis Colts, 22-16 on Christmas Day.

The explosive Arizona offense that topped 30 points in seven of the first nine games has hit that mark just once in the past six contests. The Cardinals tallied 16 or fewer points in three of those games.

Making matters worse, the Cardinals were routed by the Carolina Panthers (34-10) and the Detroit Lions (30-12) during that stretch.

Getting dominated by the Lions on Dec. 19 prompted the question: “What’s wrong with the Cardinals?”

“That’s what we’ve got to figure out,” Arizona coach Kliff Kingsbury said. “I don’t have an answer to that, but it’s untimely penalties, the snaps hitting the ground, missed kicks. I mean, it’s just things that we had done well all year, but we’re not doing well (now).”

Quarterback Kyler Murray looked like the MVP favorite when he threw 17 touchdown passes during the 7-0 start. He hurt an ankle in the final seconds of a 24-21 loss to the Green Bay Packers in Week 8 and missed three games but has just four scoring passes in four contests since returning.

Murray isn’t much interested in the rhetoric when it comes to the slippage on his part or the Cardinals in general.

“Me personally, I’m not panicking. I don’t think anybody on this team is panicking,” Murray said. “Yes, we’ve lost three in a row. The Rams lost three in a row, everybody was counting them out, the Chiefs (lost four of six). It’s not a thing where it doesn’t happen. This is the NFL; it’s not easy.”

“This is a postseason football team,” McCarthy said of the Cardinals. “(Murray) is a postseason-caliber quarterback. He’s dynamic. He brings a unique challenge because of his ability to move and throw the ball in any quadrant of the field. And he has such a quick release and can really spin it.”

Dallas currently is in the No. 2 position in the NFC, one game behind the conference-leading Green Bay Packers.

Dak Prescott matched his season high of four touchdown passes, progress after he totaled five in the previous five games.

The defense has prolific playmakers in rookie linebacker Micah Parsons and cornerback Trevon Diggs, who are enjoying historic campaigns.

Parsons has 13 sacks and is closing in on the NFL rookie record of 14.5 set by Jevon Kearse of the Tennessee Titans in 1999.

“Yeah, it is on my mind,” Parsons said of the record. “Obviously, that would be an extraordinary thing to do for a guy who’s an off-ball linebacker. It would really mean a lot to me. I know I can do it.”

Diggs recorded his 11th interception against Washington to match the franchise record set by Everson Walls in 1981. In fact. Diggs is the first NFL player with 11 picks in a season since Walls.

Dallas is hoping to get eight-time Pro Bowl left tackle Tyron Smith back after a two-game absence. Smith (ankle) was a limited practice participant on Wednesday.

Arizona standout safety Budda Baker (ribs) sat out practice Wednesday and linebacker Devon Kennard was placed on the COVID-19 list. Running back James Conner (heel) was among other Cardinals to miss the session.

Arizona has won five of the past six meetings with Dallas, including a 38-10 road win last season.