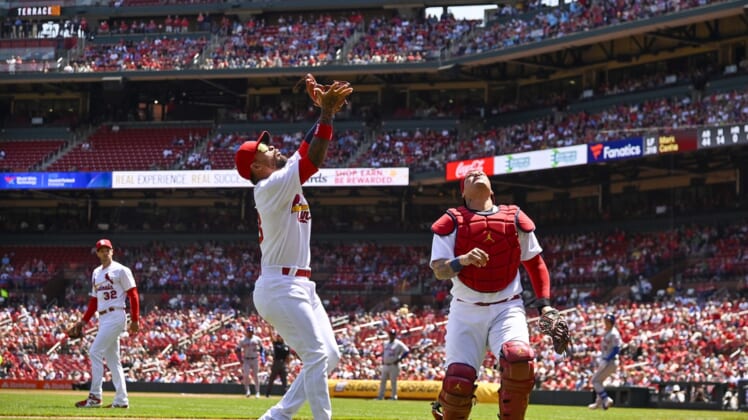 Nolan Arenado drove in three runs before getting ejected and the St. Louis Cardinals rallied past the visiting New York Mets 10-5 in a contentious game Wednesday.

Corey Dickerson and Dylan Carlson drove in two runs each as the Cardinals erased a 4-1 second-inning deficit and snapped their three-game losing streak.

Brandon Nimmo and Tomas Nido had two-RBI games for the Mets, who lost for just the fourth time in their last 15 games.

The benches and bullpens emptied in the bottom of the eighth inning after Arenado became enraged by Yoan Lopez’s up-and-in pitch. Things escalated after Arenado shoved Nido, the Mets’ catcher, to earn an ejection.

Amid all the subsequent pushing and shoving, Cardinals coach Stubby Clapp wrestled Mets slugger Pete Alonso to the ground. Clapp was also ejected.

New York third baseman J.D. Davis left the game in the top of the eighth inning after Genesis Cabrera hit him in the foot with a pitch.

Dickerson’s RBI single give the Cardinals a 1-0 first-inning lead. The Mets responded in the second inning when Nido lined a two-run single and Nimmo lined a two-run double to put them up 4-1.

Arenado’s two-run single in the bottom of the third inning cut the Mets’ lead to 4-3.

The Cardinals continued their rally with a five-run fourth inning to move ahead 8-4. The key blows were Dickerson’s RBI infield single and Carlson’s two-run triple.