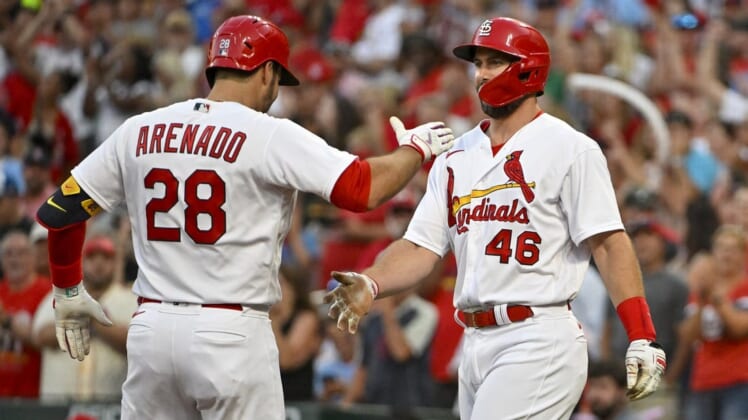 All-Star infielders Nolan Arenado and Paul Goldschmidt will be placed on Major League Baseball’s restricted list ahead of the St. Louis Cardinals’ upcoming two-game series against the Blue Jays in Toronto.

John Mozeliak, the Cardinals president of baseball operations, told reporters on Sunday that the pair would sit out the games on Tuesday and Wednesday because of Canada’s federal vaccine mandate for anyone entering the country.

To be eligible to play in Toronto, players are required to have one dose of the Johnson & Johnson vaccine or a second dose of the Pfizer or Moderna vaccine at least 14 days prior to traveling.

Catcher Austin Romine also will miss the series because he is unvaccinated against COVID-19.

“I did talk to Nolan recently about this, and he noted (at this time) that he was hoping to begin a family with his wife and for him it was a personal decision, and we honor that,” Mozeliak said. “With regard to Goldy, I checked in on him, but we never had a lengthy discussion on it. I spoke with him a year and a half ago about it, and of course I understood his thinking then. I never had any discussion with Mr. Romine.”

Catcher Ivan Herrera, outfielder Conner Capel and infielder/outfielder Cory Spangenberg will replace the trio on the roster for the series, per Mozeliak.