Cards look to add weapon with return of Jack Flaherty vs. Nationals 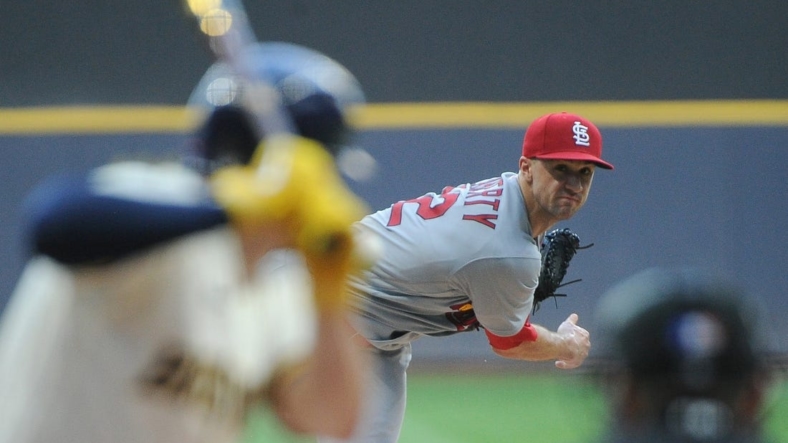 Flaherty, who has no wins or losses to go with a 5.63 ERA in three starts this season, will start the opener of the four-game series.

“It will be exciting,” he said. “Opening Day, round two.”

He completed just eight innings in those previous starts before shutting down again. In his most recent appearance, June 26 vs. the Chicago Cubs, he gave up no runs and one hit in two innings of the Cardinals’ 6-5 loss in 10 innings.

After some rest and recovery, Flaherty made five rehabilitation starts in the minors and topped out with 102 pitches in his final outing for Double-A Springfield on Wednesday.

Overall, he had a 3.00 ERA in seven minor league outings this season with 34 strikeouts in 27 innings.

In his absence, the Cardinals went 22-7 in August and won their first three games in September to take control of the National League Central race.

The Cardinals have won four games in a row and seven of their last eight.

“Everybody’s done a really good job,” Flaherty said. “It’s been fun to watch, but it will be more fun to a part of.

“Last year, winning 17 straight was fun and all, but there’s a type of relentlessness that’s going on, no matter the situation we get into. Everybody’s contributing. Everybody’s doing something.”

Flaherty is 2-0 with a 2.25 ERA in three career starts against the Nationals.

Washington, which sits in last place in the NL East, has won four of its last five games.

“We’re going to play a lot of teams that are in playoff hunts here coming up,” Nationals pitcher Erick Fedde said. “It’s our job to play spoiler and continue to play good baseball. It’s a lot of fun doing that.”

The Nationals will open this series with Anibal Sanchez (1-5, 5.05 ERA), who has allowed just two runs over 16 1/3 innings in his last three outings.

“He’s just going out there with no fear and attacking the strike zone,” Nationals manager Dave Martinez said.

“Something I did was try to throw more strikes than normal to get quick outs,” Sanchez said. “I tried to not make a mistake. I tried to execute to get everyone to make quick outs.”

After wearing No. 27 for most of the season, Sanchez got to don his favored No. 19 after the Nationals freed up the number by trading first baseman Josh Bell to the San Diego Padres.

Sanchez earned a 5-1 victory Wednesday over the Oakland Athletics in his last start. He held them to their one run on three hits in seven innings to record his first win since 2020.

“The No. 19 back has given me a little extra energy,” Sanchez said. “The number has been with me my whole life. Being together, I think we’ve got a really good match. It’s something that when it’s on my back, it’s really something important for me.”

Sanchez took a 6-2 loss to the Cardinals on July 29. He allowed those six runs in 5 2/3 innings and yielded homers by Nolan Gorman and Lars Nootbaar.

Washington designated hitter Nelson Cruz was out of the starting lineup Saturday and Sunday after sustaining a knee contusion on a foul ball Friday.