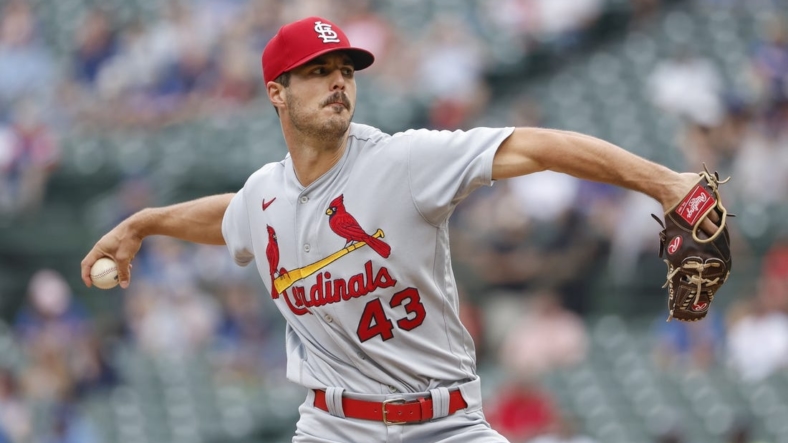 Dakota Hudson will try to solidify his standing with the St. Louis Cardinals when he faces the Cincinnati Reds on Tuesday.

The right-hander will start for the Cardinals in the second game of their three-game road series. St. Louis won the opener 13-4 on Monday, its 13th victory in 16 games.

Hudson (7-6, 4.23 ERA) earned an 8-3 victory over the Chicago Cubs on Thursday in his best performance since early June. He gave up just two runs on five hits and two walks in seven innings.

“This is what he’s capable of doing,” Cardinals manager Oliver Marmol said. “He was able to have shutdown innings every time we scored. He had the quick inning, which is appreciated by everybody on the field. And then, against right-handers and left-handers, he did a nice job of attacking the zone with multiple pitches, which is going to be the most important thing for him.”

In his prior four starts, Hudson allowed 11 runs on 20 hits and 11 walks in 17 2/3 innings. That put his rotation spot in peril with Jack Flaherty due to return from his shoulder injury after one more rehabilitation start for Triple-A Memphis.

Hudson sped up his pitching pace and demonstrated better command in his most recent outing.

“Just trying to kind of compete, have a game to compete with within the game, rather than being so focused on being perfect out there,” Hudson said. “I think that freed me up mentally. I could worry about executing pitches.”

TJ Friedl (2-for-3, triple, two RBIs) and Kyle Farmer (1-for-5, two walks, RBI) have had the most success against Hudson among the current Reds.

The Reds will counter Hudson with Justin Dunn (1-2, 5.12 ERA), who will be making his fifth start for the team. He came from the Seattle Mariners in an offseason trade and spent the bulk of this season recovering from a shoulder injury sustained last season.

Dunn has pitched better in his past two starts, allowing just three runs on seven hits and six walks in 11 innings. In his first two starts for the Reds, he gave up eight runs on 12 hits and four walks in 8 1/3 innings.

In his latest outing, a 4-0 loss to the Philadelphia Phillies on Thursday, Dunn lasted six innings. He yielded two runs on four hits, struck out five and walked two.

“I think that was the best game that he’s pitched since he was with us,” Reds manager David Bell said. “All of his pitches had good life, maybe the best life he’s had. Everything was coming out of his hand crisper. That was a good sign, and hopefully he can finish the season strong.”

The Tuesday game will be Dunn’s first career appearance against the Cardinals.