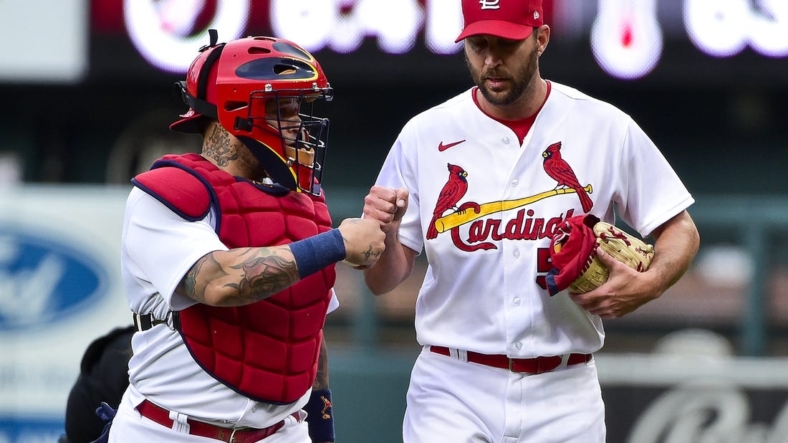 They will make their 324th start together as batterymates — tying Mickey Lolich and Bill Freehan of the 1963-75 Detroit Tigers for most in major league history.

“We’ve been through more than just baseball together,” Wainwright said, according to the St. Louis Post-Dispatch. “Our families grew up together. We grew up together. I always thought I’d have grandkids before he retired. It’s a special thing.”

The Cardinals (81-56) have won nine of 11 games coming into the finale of the four-game series. The Nationals (48-89) have lost two in a row after winning five of six.

Wainwright (10-9, 3.21 ERA) is looking to rebound from a difficult outing. On Saturday, he allowed four runs on nine hits over five innings but still earned an 8-4 victory over the Chicago Cubs.

“If you’ve won the game with your pitching looking like that, then you’ve done something,” Wainwright said.

Molina said, “When you don’t have your best and go five innings like he did, that’s amazing. That tells you how good he is.”

Wainwright couldn’t recall much that he liked about his stuff against the Cubs.

Wainwright is 10-5 with a 3.09 ERA in 19 career appearances against the Nationals, including 17 starts.

Washington’s Thursday starter, Josiah Gray (7-9, 4.91 ERA), is coming off an uneven performance against the New York Mets. He allowed six runs on six hits and four walks in five innings during a 7-3 loss on Friday.

“He kept us in the ballgame,” Nationals manager Dave Martinez said. “That sixth inning, (he) comes out and he just made a couple mistakes. Ball started going over the plate, ball started getting up on him and for me that’s an indication that he was probably a little bit tired. But other than that, he threw the ball well.”

Gray took a 5-0 loss to the Cardinals on July 31 in his only career start against them. He gave up four runs on five hits and two walks, with Corey Dickerson’s three-run homer doing most of the damage.

While the Nationals are testing several very good young players this season, they have also gained offensive mileage from minor league veteran Joey Meneses, who is batting .339 with a .368 on-base percentage and a .567 slugging percentage through his first 31 games.

The 30-year-old rookie has eight doubles, seven homers and 17 RBIs.

“He’s always in every at-bat, he’s always ready for the next pitch,” Martinez said. “I wouldn’t say that he surprises me because I felt when I saw him in spring training that he had a quick bat, but he’s done it all year and he continues to do it.”

“I think that all the years have given me confidence,” Meneses said, according to MLB.com. “I know myself, I know when I am doing something wrong. I think that is what has given me success here.”