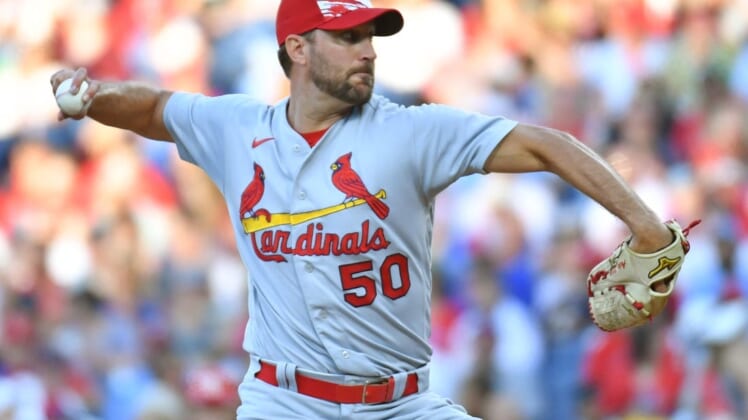 Adam Wainwright will continue adapting to life without injured catcher Yadier Molina when the St. Louis Cardinals open a four-game series against the visiting Philadelphia Phillies on Friday.

Molina, who has been behind the plate for 316 of Wainwright’s career starts, has been sidelined since June 15 with knee soreness.

“He brings a calming presence to a pitching staff, but he’s also a guy that the other team looks out and knows it can’t steal on,” the 40-year-old right-hander said. “He does a lot of things out there defensively probably like nobody else we’ve seen in our lifetime. There haven’t been many defensive catchers like him. Ever. I think anybody would say that. Johnny Bench said that.”

Wainwright (6-6, 3.26 ERA) has started his last four games without Molina and allowed four runs in three of them while working with Andrew Knizner or rookie Ivan Herrera. The Cardinals recently replaced Herrera with veteran Austin Romine.

“I’m sad out there,” Wainwright said. “I’m not pitching sad but I miss my buddy. Hopefully, we see him soon.”

The Phillies have won five of seven games coming into Friday’s contest.

“We’re playing well and getting a lot of contributions from a lot of people and that’s big,” interim Phillies manager Rob Thomson said.

The Cardinals lost six of seven games on their road swing before scraping out a 3-2 victory in 11 innings Thursday in Atlanta.

Wainwright lost his previous start 4-0 to the Phillies on Sunday. He allowed all four runs on eight hits — including a homer by Hoskins and Realmuto — in 5 2/3 innings.

Wainwright gets a rematch with pitcher Zack Wheeler (7-4, 2.66 ERA), who scattered four hits and struck out five over seven innings in that contest.

As that game wore on, Wheeler worked to get soft contact from Cardinals hitters rather than reaching back for strikeout velocity.

“I knew as the pitch count went up that I was going to have to get contact,” Wheeler said. “I thought that after those early innings, we did that and the defense behind me played well.”

Wheeler is 2-2 with a 3.26 ERA in five career starts against the Cardinals.

The sputtering Cardinals offense expects to get outfielder Tyler O’Neill back from the 10-day injured list for this game. He completed a rehabilitation assignment at Triple-A Memphis after recovering from a hamstring strain.

Also, reliever Genesis Cabrera has been throwing bullpen sessions and could return from the 15-day IL with his undisclosed issue.