The Arizona Cardinals have been good in many areas. Some of those are categories where the Carolina Panthers are falling short.

So, this upcoming matchup looks like an uphill battle for the Panthers when the teams meet Sunday in Glendale, Ariz.

Yet there’s a strange similarity as the team’s prepare for this game — both teams have concerns at quarterback.

“It’s a battle of attrition once you hit the second part of the season,” Cardinals coach Kliff Kingsbury said.

So much so that Kingsbury opted for a walk-through over a full-fledged practice Wednesday given that 12 players were listed as non-participants.

The Cardinals (8-1) have the NFL’s best record despite playing last week without Kyler Murray, who has an ankle injury.

The Panthers (4-5), who’ve lost five of their last six games, need to sort out their quarterback situation, further complicated by an injury to erratic Sam Darnold‘s right shoulder that will keep him out of action for at least a month, coach Matt Rhule said.

Carolina acquired Matt Barkley off the Tennessee Titans practice squad, but it’s unclear if he’ll be a solution. P.J. Walker, who was used in last month’s road loss to the New York Giants, will get the start in Arizona.

The Panthers’ problems are widespread on offense, losing center Matt Paradis with a torn knee ligament in last week’s setback to New England. They’ve scored just one touchdown across the past three games combined, though they happened to win once during that stretch.

“We’re going to stay together,” Panthers linebacker Shaq Thompson said. “We’re in this together. … We’re going to get this thing going and rocking.” 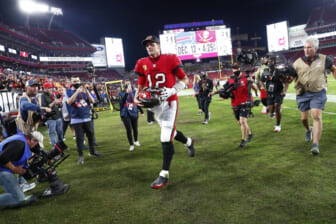 Cardinals vs Panthers: Arizona looking to stay hot, no matter who starts at QB

Arizona has given up 17.3 points per game, reflecting the third-best mark in the NFL.

The Cardinals rely on offense and they’ve generally been productive. They’ve had an NFL-high six games this season with 30 or more points.

Murray has thrown for 17 touchdowns and seven interceptions in eight games. Colt McCoy filled in for last week’s 31-17 victory at San Francisco.

The Cardinals would like Murray at the controls as he guided the season-opening seven-game winning streak.

“I think it’s day by day,” Murray said Wednesday. “I think we’ve got a great plan. I feel way better than I did when I talked to you last time, so, I think that’s a plus and I’m excited.”

While Murray’s status is unclear for the Carolina game, he’s not alone.

Receivers DeAndre Hopkins (hamstring) and A.J. Green (COVID protocols) are hoping to be back. Murray and Hopkins are day-to-day, while tight end Demetrius Harris was activated from the reserve/COVID list Wednesday.

The Cardinals are generally restocking across the roster with injuries and the COVID list potentially impacting availability. Defensive lineman Zach Kerr rejoined the team after playing in a dozen games for Arizona in 2019.

The next-man up mentality is frequently mentioned in sports. For the Cardinals, it has tended to work well recently.

“When guys get those opportunities and step up, it has been huge for us,” offensive lineman D.J. Humphries said.

For instance, James Conner turned out to be a strong performer in the win over the 49ers in Chase Edmonds’ absence at running back. Conner has 10 touchdown runs and one TD catch. Edmonds was one of the 12 listed as a DNP on Wednesday after injuring his ankle on Arizona’s first play from scrimmage last week.

Arizona’s injuries have spread to special teams. Long snapper Aaron Brewer is expected to miss at least a few weeks with a broken arm.

The Panthers didn’t have defensive Brian Burns or linebacker Frankie Luvu on the practice field Wednesday as they deal with injuries.

The Panthers are 13-5 all-time against the Cardinals, including an 11-4 mark in regular-season matchups. Carolina has won the past five meetings overall, including 31-21 last year at home.