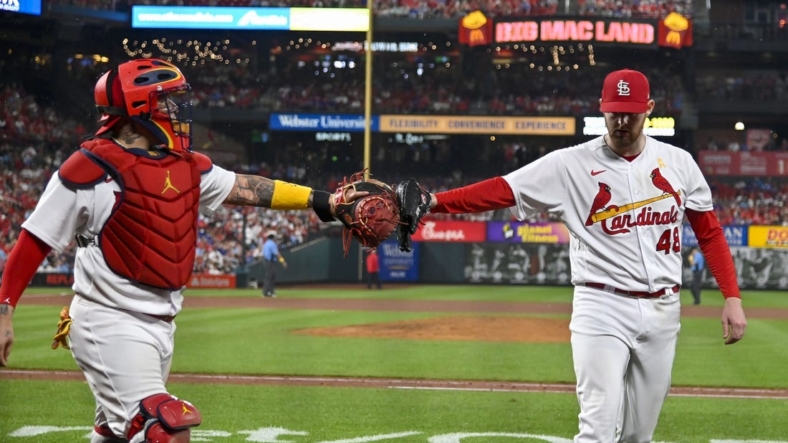 Starting pitcher Jordan Montgomery will look to pay more trade dividends for the St. Louis Cardinals on Wednesday night when they host the Washington Nationals.

“The dude’s calm, regardless of the situation,” Cardinals manager Oliver Marmol said. “The more guys you can have like that, the better off you’re going to be.”

Montgomery will get the call for the third game of this four-game series in St. Louis. The Cardinals lost 6-0 on Monday and won 4-1 on Tuesday. St. Louis (80-56) has not lost back-to-back games since July 24 and 26.

“I did not know that,” Marmol said. “We are focused on winning every game, and we won’t change that.”

The Nationals (48-88) had won five of their last six games before Tuesday’s loss.

Montgomery, a left-hander, is coming off an 8-0 victory over the Chicago Cubs on Friday. He threw six innings, blanking the Cubs on seven hits and two walks, with four strikeouts.

He has learned to trust his infield defense, which includes Gold Glovers Nolan Arenado, Paul Goldschmidt and Tommy Edman.

“When Monty pitches, he throws that sinker, so you usually get a lot of work,” Arenado said. “I like it because I want the ball hit to me. I feel like I did a good job of making every play.”

This will be Montgomery’s first career start against the Nationals.

Washington manager Dave Martinez has selected right-hander Cory Abbott (0-2, 4.39) to make a spot start on Wednesday so that pitcher Patrick Corbin could have an extra day off before his next start.

Abbott has pitched twice in relief this month, both times for one scoreless inning against the New York Mets.

He pitched a scoreless inning of relief against the Cardinals on July 31 while striking out two and walking one. Abbott is 0-0 with a 3.00 ERA in two career appearances (six innings) against them.

The Nationals got veteran designated hitter Nelson Cruz back in the lineup Tuesday after his recovery from a knee contusion. But the focal point for Martinez will continue to be developing young players such as shortstop C.J Abrams, who is batting .226 in 66 games this season (20 with the Nationals, 46 with the San Diego Padres).

Abrams, 21, was acquired from San Diego in the trade that sent Juan Soto there last month.

“He’s been really good with everything.”

The Nationals are working with Abrams to alter his hitting approach so he can maximize the value of his speed.

“We’ve talked a lot about him staying behind the baseball and really not trying to do too much,” Martinez said. “I talked to him about just hitting hard ground balls, and he’s done well. He’s staying on top of the baseball a lot better. He sees the ball well. He doesn’t necessarily chase when he gets back on time, and he’s doing really well with that right now.”