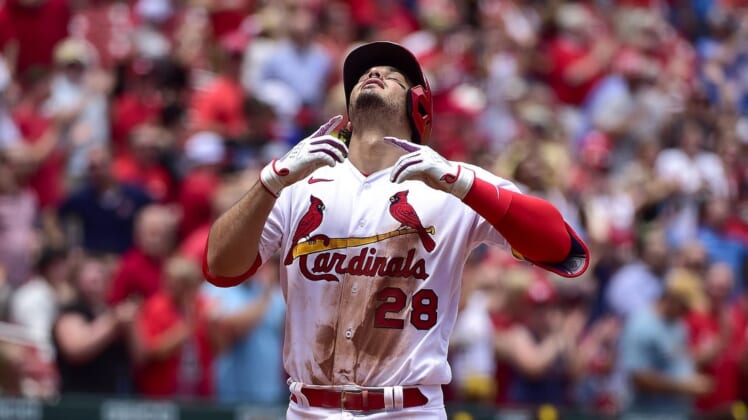 Nolan Arenado hit a two-run homer and an RBI single to power the St. Louis Cardinals past the visiting San Diego Padres 5-2 on Wednesday to complete a three-game sweep.

Arenado finished with three hits, while Brendan Donovan added a pair of singles as the Cardinals won for the ninth time in 12 games.

The Padres’ offensive woes continued with just 19 runs in their last eight games (2.4 per game) and lost six of those contests.

Cardinals starting pitcher Dakota Hudson (4-2) worked a season-high seven innings while allowing one run on four hits and a walk with three strikeouts. Nick Wittgren got the final out to earn his first save.

Juan Yepez drove in two runs for the Cardinals with a sacrifice fly and a double. Paul Goldschmidt added a single, two walks and two runs as he extended his on-base streak to 37 games and his hitting streak to 23 games.

San Diego’s Jurickson Profar led off the game with a double and scored on Manny Machado’s single to put the Padres up 1-0. Luke Voit walked to put two aboard with one out, but Cardinals center fielder Harrison Bader ended the rally with a diving catch of Ha-Seong Kim’s shallow fly ball.

The Cardinals tied the game 1-1 in the fourth inning. Goldschmidt walked, raced to third on Arenado’s single before scoring on Yepez’s sacrifice fly.

In the sixth inning, the Cardinals pushed their lead to 3-1 on Goldschmidt’s single and Arenado’s home run, his 10th.

Hudson settled into a groove after escaping the first inning. He retired 18 consecutive batters until Jake Cronenworth hit a seventh-inning single. Austin Nola hit a two-out single to put runners on the corners, but Hudson struck out Trent Grisham to end the threat.

The Cardinals pushed their lead to 5-1 on the eighth on Arenado’s RBI single and Yepez’s run-scoring double.

Voit’s ninth-inning home run off reliever Kodi Whitley, his fourth, in the ninth cut the Padres’ deficit to 5-2. San Diego then loaded the bases against Whitley, but Robinson Cano flied out against Wittgren to end the game.