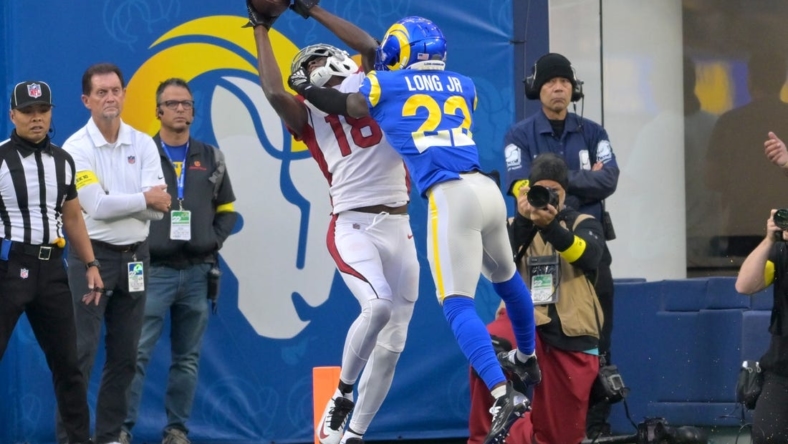 In a battle of backup quarterbacks, the visiting Arizona Cardinals dropped the defending Super Bowl champion Los Angeles Rams into last place in the NFC West with a 27-17 victory Sunday in Inglewood, Calif.

For the Rams (3-6), starting quarterback Matthew Stafford did not play because of a concussion, and counterpart Kyler Murray was out with a hamstring injury for the Cardinals (4-6).

Colt McCoy, who was 2-1 as a starter last season when Murray was sidelined by a high ankle sprain, completed 26 of 37 passes for 238 yards and a touchdown on Sunday, with wide receivers DeAndre Hopkins catching 10 passes for 98 yards and Rondale Moore making nine receptions for 94 yards.

Rams quarterback John Wolford was 24 of 36 for 212 yards and a touchdown, with one interception. Wide receiver Cooper Kupp had only three receptions for minus-1 yard and suffered an ankle injury early in the fourth quarter.

Arizona had no turnovers in the game, while the Rams had two that led to 10 points.

The Cardinals took a 17-3 lead into halftime after two late second-quarter touchdowns.

The teams traded field goals on the first two possessions of the game, with Matt Gay hitting from 36 yards for the Rams and Tristan Vizcaino also connecting from 36 for Arizona.

The Rams then had three consecutive three-and-outs and the Cardinals two. But after the Rams’ third, the Cardinals took a 10-3 lead with 1:56 to play in the half on a 4-yard run by James Conner. Hopkins had four receptions on the drive, and McCoy ran for 2 yards on fourth-and-1 to set up the Conner score.

Four plays later, linebacker Myjai Sanders hit Wolford as he was passing, and defensive end J.J. Watt recovered quickly at the 30-yard line. The play originally was whistled dead as an incomplete pass, but a replay review reversed the play.

Five plays later, wide receiver A.J. Green scored on a 6-yard pass from McCoy with 24 seconds remaining in the first half.

The Rams cut the lead to 17-10 in the third quarter, but the Cardinals answered when Moore had a 14-yard reception on third-and-17 and a catch on fourth-and-3. Moore made a spectacular catch on a 26-yard play to the 15-yard line. Conner scored again on a 9-yard run.

After Vizcaino made a 46-yard field goal, the Rams scored the final points on a 3-yard pass from Wolford to wide receiver Van Jefferson with seven seconds remaining.

Arizona tight end Zach Ertz left the game with a knee injury in the first quarter. He went to the sideline and was taken by a cart to the locker room as the quarter was coming to a close.