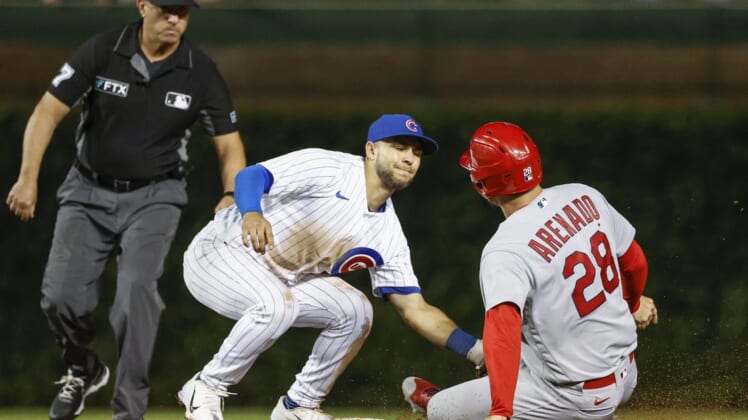 With their season-long winning streak in the past, the St. Louis Cardinals seem poised to begin another run — at the expense of the Chicago Cubs.

The visiting Cardinals will aim for their 10th victory in 11 games when they face the Cubs on Wednesday night in the fourth contest of a five-game series. The Cardinals have won two of the first three games.

St. Louis’ season-high, eight-game winning streak ended while the team recorded just five hits and went 0-for-10 with runners in scoring position during a 2-0 loss to Chicago in Game 1 of Tuesday’s doubleheader.

However, the Cardinals regrouped to pound out 16 hits and roll to a 13-3 rout in the nightcap for their 18th win in 22 games.

The NL Central-leading Cardinals have hit .310 with 18 homers while averaging seven runs over the last 10 games. Meanwhile, their pitching staff has a 2.17 ERA with an opponents’ batting average of .178 in the last 12 contests. They’ve yielded five runs and 13 hits in the first three games of this set.

“The guys are just continuing to compete regardless of the situation,” St. Louis manager Oliver Marmol said. “That’s what you want this time of year.”

Scheduled St. Louis starter Miles Mikolas (10-9, 3.32 ERA) allowed 10 runs and 14 hits in 2 2/3 innings of a 16-5 loss at Colorado on Aug. 9. But since that rough outing, he has given up three runs with six hits total while going eight innings in each of the two starts, both wins.

The right-hander is 1-0 with a 4.15 ERA in three starts — all St. Louis wins — against the Cubs this season. His lone winning decision came during the Cardinals’ 14-5 rout at Chicago on June 3.

The Cubs’ Nico Hoerner is 3-for-5 vs. Mikolas this season, while teammate Rafael Ortega is 4-for-10 against him.

All-Star Willson Contreras is a lifetime .368 hitter, with two doubles and a home run vs. Mikolas, but he could miss a third straight game due to an ankle issue for Chicago.

The Cubs are 1-3 following a five-game winning streak.

Though the Cubs’ pitchers were roughed up in Tuesday’s nightcap, their starters have a 2.53 ERA over the last 10 games.

Chicago is expected to start Luke Farrell in his 2022 debut. Signed to a minor league deal by the Cubs in April, the right-hander is making his second stint with Chicago. He went 1-1 with a 4.74 ERA last season.

St. Louis’ Corey Dickerson, who matched a career-high with four hits in Tuesday’s Game 2, is 3-for-4 vs. Farrell. Nolan Arenado and Paul Goldschmidt are a combined 2-for-5 with a homer apiece against him.

Arenado, who homered and had three other hits in Game 2, is batting .321 with three home runs and nine RBIs in 14 games against the Cubs in 2022.

Chicago infielder Nick Madrigal is 8-for-20 in his last five games.