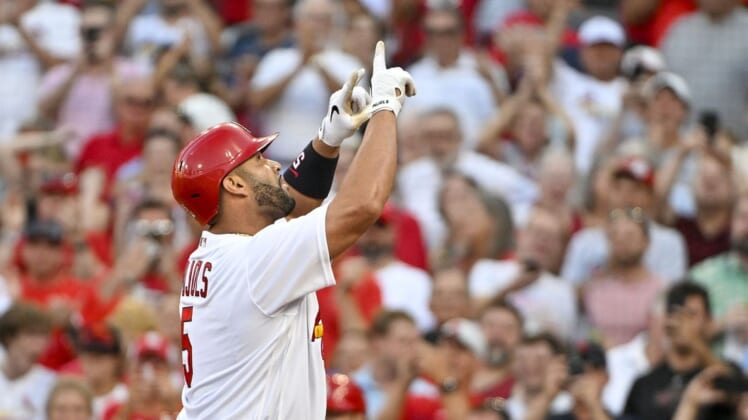 Johan Oviedo (2-1), the second of seven Cardinals pitchers, earned the victory after allowing one run on two hits and a walk in 1 1/3 innings. Giovanny Gallegos allowed one run in the ninth but was credited with his 10th save.

Trea Turner went 2-for-4 with a two-run homer and three runs for the Dodgers, whose seven-game winning streak came to an end. Freddie Freeman went 4-for-5 with a homer, two RBIs and three runs scored.

The Cardinals moved ahead 3-0 in the second inning. Pujols hit a solo homer, Juan Yepez hit a single, Corey Dickerson hit a double, Yepez scored on a wild pitch, and Dickerson scored on Knizner’s single.

The Dodgers cut the deficit to 3-1 in the third inning on Turner’s single and Freeman’s RBI double. Gorman countered with his homer in the bottom of the inning.

The Cardinals made it 6-1 in the fourth inning.

Dickerson led off with another double and scored on Knizner’s single. Carlson walked and Paul Goldschmidt and Nolan Arenado hit singles to produce another run.

The Dodgers cut the deficit to 6-3 in the fifth inning on Turner’s two-run homer, which scored Mookie Betts. They trimmed the margin to 6-4 in the sixth on Hanser Alberto’s double and Austin Barnes’ RBI grounder.

Los Angeles edged a run closer in the seventh. Turner reached on catcher’s interference and Freeman and Will Smith followed with singles to produce a run.

Lars Nootbaar hit a leadoff single in the eighth inning and scored on Knizner’s single to make it 7-5. Freeman’s homer in the ninth cut the deficit to 7-6.