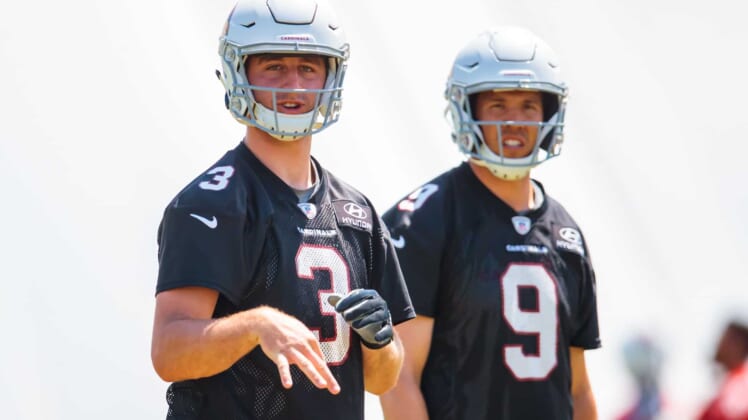 Now that NFL training camps are set to get going within the next two weeks, we’re going to hear a whole lot more about competition for starting jobs around the NFL. Much like every other summer before, that will be headlined by the quarterback position.

In Arizona, the Cardinals will be choosing between free agent acquisition Sam Bradford and rookie No. 10 overall pick Josh Rosen. Given he signed a one-year, $20 million deal in March, Bradford seems to be the odds-on favorite to win the job. Though, Rosen will be given ample opportunities during camp with the Cardinals bringing the injury-plagued Bradford along slowly.

In an odd twist at this point in the calendar year, star Cardinals corner Patrick Peterson has already chosen a side. It shouldn’t come as much of a surprise that he prefers a veteran in Bradford over the rookie.

“Well, right now I’d probably take Sam (Bradford) due to his experience. Due to some of the records that he has in the league,” Peterson said, via NFL.com. “Because when Sam is healthy and is on the field and has talent around him, he’s a top-10 quarterback.”

Calling Bradford a top-10 quarterback might seem like a reach. But it’s pretty cool Peterson has his new teammate’s back. Peterson did address the knee injuries that has cost Bradford 42 games over the past five seasons and all but two games last year.

“The biggest knock on Sam is just staying on the field. I think we have a pretty good opportunity to keep him on the field because last year he really didn’t have to fix anything, just cleaning up his knee.”

That’s the issue here. Does Arizona have the offensive line to protect Bradford from the dominant defensive fronts he’s going to see in the NFC West this coming season? While Rosen would struggle under these circumstances, he’s not a statue in the backfield like his older counterpart.

In any event, we now know where Peterson stands. Whether the Cardinals’ brass takes that into account remains to be seen.