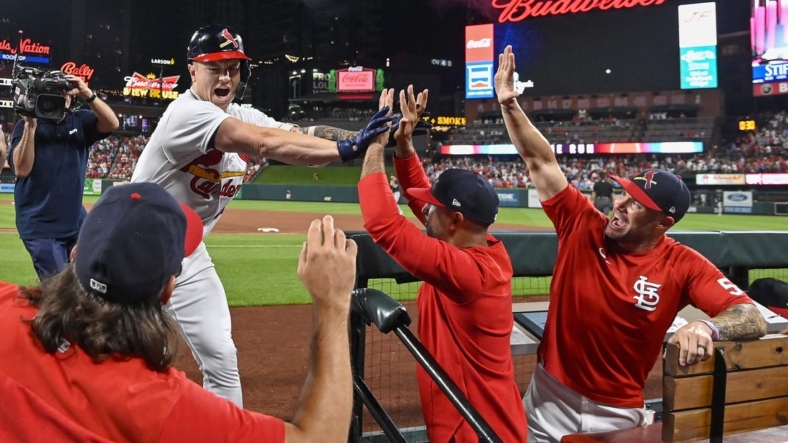 The St. Louis Cardinals will try to build on their interdivision success when they face the Cincinnati Reds on Monday.

The Cardinals will carry a 33-19 record against National League Central opponents into the opener of their three-game series in Cincinnati. They are 7-4 against the Reds this season.

Overall, they have won 12 of their last 15 games to maintain their six-game division lead over the second-place Milwaukee Brewers.

Cardinals starting pitcher Miles Mikolas (10-10, 3.35 ERA) will try to rebound from his 7-1 loss to the Chicago Cubs in his last outing. He allowed five runs (three earned) on six hits in 6 2/3 in innings.

“Not a super great outing,” Mikolas said. “Not really happy about it.”

The big blow against him was Zach McKinstry’s two-run homer in the seventh inning.

Prior to the Cubs loss, Mikolas allowed just three runs on six hits and a walk in 16 innings in his previous two starts.

Jonathan India (3-for-8, two homers, three RBIs) and Colin Moran (8-for-29, two doubles, homer, four RBIs) have hit well against Mikolas, while Kyle Farmer (1-for-8) has not.

Due to those injuries, the Reds are expected to give veteran Chase Anderson his first major league start this season. Anderson was 7-3 with a 4.50 ERA in 27 games, including 16 starts, with the Triple-A Toledo Mud Hens and Double-A Durham Bulls this season.

“The last year has been a grind,” he told the Cincinnati Enquirer. “It’s been good perspective too . . . get a little recheck, get back in the position to be in the big leagues. I’m not taking it for granted, that’s for sure.”

Last season, Anderson was 2-4 with a 6.75 ERA for the Philadelphia Phillies. Prior to that he had major league stops in Arizona, Milwaukee and Toronto.

After Anderson opted out of his minor league deal with the Tampa Bay Rays, the Reds signed him to a minor league contract and placed him on their taxi squad based on good reports from coaches Derek Johnson and J.R. House.

“We’ve seen him pitch a lot. He has a connection to a few people here for sure,” Reds manager David Bell said. “I feel like I know him from those connections. He does have experience and he’s been a really good pitcher for a long time now.”

Nolan Arenado has four home runs and 10 RBIs against Anderson in 27 at-bats.

Reds outfielder Nick Senzel missed the weekend’s games due to left hamstring tightness and is questionable for this series.