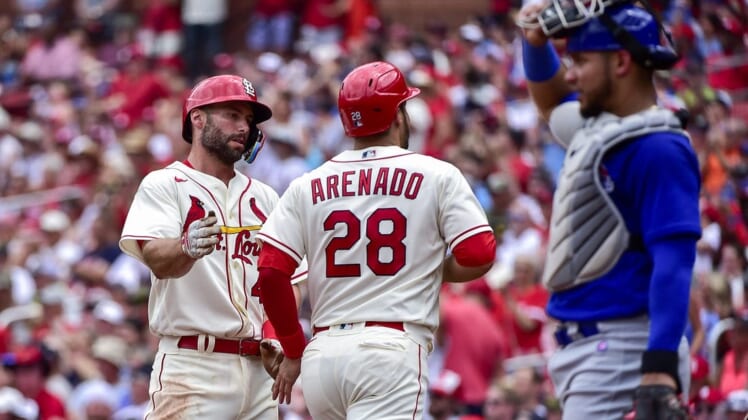 Herrera’s eighth-inning sacrifice fly broke a 3-3 tie and made a winner of reliever Ryan Helsley (3-0), who got the final five outs for the Cardinals.

The Cardinals moved ahead in the first inning with Paul Goldschmidt’s single, Nolan Arenado’s double, and Brendan Donovan’s two-run single with two outs.

The Cubs cut the lead to 2-1 in the fifth inning. Patrick Wisdom and Nico Hoerner hit singles, then Wisdom took third base on a flyout and scored on Alfonso Rivas’s sacrifice fly.

Nelson Velazquez followed with a single, but Mikolas struck out Christopher Morel to end the threat.

Arenado greeted reliever Rowan Wick with a single in the sixth inning. Donovan walked and Dylan Carlson lined a RBI double to push the Cardinals’ lead to 3-1.

After Juan Yepez flied out, Scott Effross relieved Wick and struck out Harrison Bader and Lars Nootbaar to limit the damage.

Goldschmidt and Arenado hit two-out singles in the seventh inning off Leiter, but Donovan grounded out to end the inning.

The Cubs tied the game 3-3 in the eighth inning when Rafael Ortega followed Morel’s single with a two-run homer off Giovanny Gallegos.

Helsley walked Contreras, who took second on a passed ball and moved to third on a groundout. After Wisdom walked, Hoerner struck out to strand the runners.