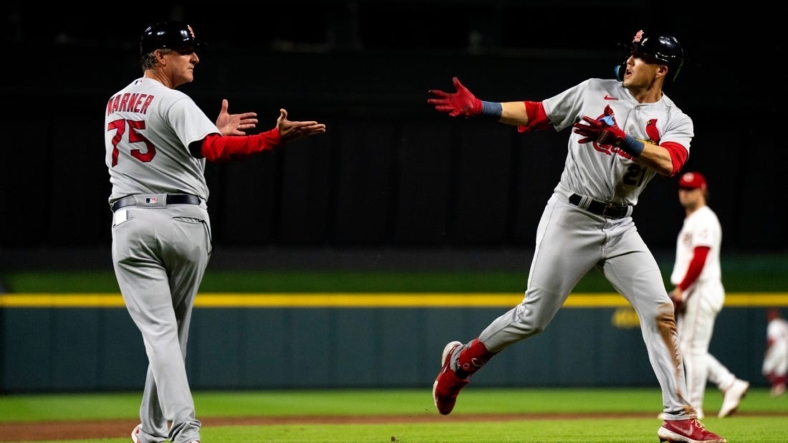 Albert Pujols drove a sacrifice fly to center to score Paul Goldschmidt with the go-ahead run and Lars Nootbaar followed two batters later with a two-run homer, lifting the visiting St. Louis Cardinals past the Cincinnati Reds 5-3 in 13 innings on Wednesday night.

Despite going 0-for-17 with runners in scoring position, the Cardinals matched their second-best August in history, finishing the month 22-7.

Chase Anderson (0-2), who made his Reds debut as a starter in the series opener Monday, was again victimized by a tape measure homer. Nootbaar’s bomb landed on top of the Cardinals bullpen in right and put St. Louis ahead 5-2.

Jake Fraley singled home TJ Friedl with one out in the 13th to draw the Reds within 5-3 against Andre Pallante. Pallante (6-4) allowed one run — it was unearned — and three hits over the final three innings to earn the win.

The Reds took a 2-0 lead in the bottom of the third when Aristides Aquino opened with a single and Jose Barrero worked a walk against starter Jose Quintana. Jonathan India extended his career-high hitting streak to 14 games with an RBI single to right-center to score Aquino.

Nick Senzel followed with a line drive single to center to score Barrero and put Cincinnati ahead 2-0.

The Cardinals responded immediately in the fourth against Reds lefty starter Mike Minor. Paul Goldschmidt opened the inning by recording his first hit of the three-game series, a line drive single to right. Nolan Arenado then drilled his 28th homer to the seats in left to tie the game at 2-2.

The Cardinals mounted a threat in the sixth when Arenado led off with a double to left-center off reliever Ian Gibaut. But Pujols popped out, and then Arenado was tagged out by third baseman Kyle Farmer as he tried to advance on Tyler O’Neill’s grounder. Paul DeJong popped out to short left to end the inning.

Yadier Molina snapped an 0-for-22 slump with a single off reliever Art Warren to lead off the seventh. Tommy Edman doubled with one out to put runners at second and third. But pinch hitter Corey Dickerson and Goldschmidt grounded out to end the threat.

Nootbaar worked a leadoff walk against Alexis Diaz in the ninth and stole second. Molina failed to get a bunt down, and then he popped out to shallow right. Brendan Donovan flew out to center and Edman grounded out to second.

The Cardinals had two more great chances with free runners in the 10th and 11th against Cincinnati reliever Reiver Sanmartin.

Goldschmidt walked to put runners on first and second with one out in the 10th, but Sanmartin induced a 6-4-3 double play. In the 11th, Pujols moved free runner Arenado to third with one out. But O’Neill grounded sharply to short and Molina struck out to end the threat.