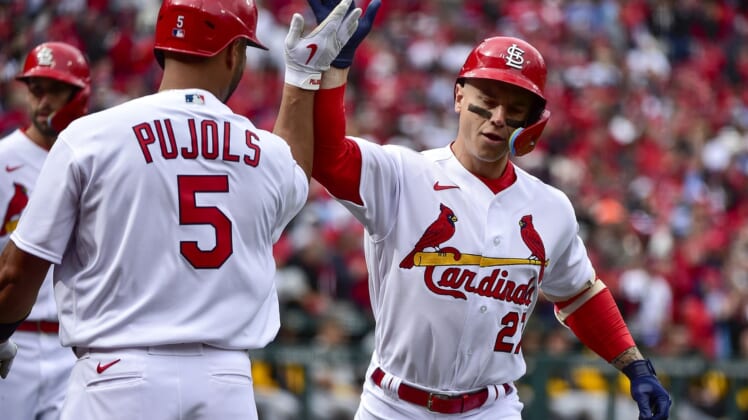 Tyler O’Neill hit a three-run home run and drove in five runs Thursday to power the St. Louis Cardinals to a 9-0 Opening Day victory over the visiting Pittsburgh Pirates.

Nolan Arenado hit a two-run homer and Tommy Edman added a solo blast for the Cardinals.

Adam Wainwright (1-0) gave up five hits with no walks and six strikeouts over six scoreless innings. Nick Wittgren, Genesis Cabrera and Ryan Helsley each added a scoreless inning to complete the shutout.

Wainwright made in his 305th career start with catcher Yadier Molina, who made his 18th Opening Day start. Wainwright improved to 22-7 in his career against the Pirates.

Hayes left in the first inning after he tried to make a diving catch on Dylan Carlson’s wind-whipped pop-up double down the left field line. Hayes, who agreed to a reported eight-year, $70 million extension before the game, missed time last season with a left wrist injury.

Underwood, the third of the six Pirates pitchers, left during the sixth inning without retiring a batter.

The Cardinals broke out on top 1-0 in the first inning. After Carlson’s leadoff double, Paul Goldschmidt drew the first of his four walks and O’Neill smashed an RBI single up the middle.

O’Neill pushed the lead to 4-0 in the second inning. After Harrison Bader hit leadoff single and Goldschmidt drew a two-out walk, O’Neill drove his homer into the left-field seats.

The Cardinals made it 5-0 in the sixth. Bader hit leadoff double, moved up on Edman’s groundout and scored on Carlson’s sacrifice fly.

Edman’s homer, O’Neill’s sacrifice fly and Arenado’s two-run homer in the eighth inning made it 9-0.