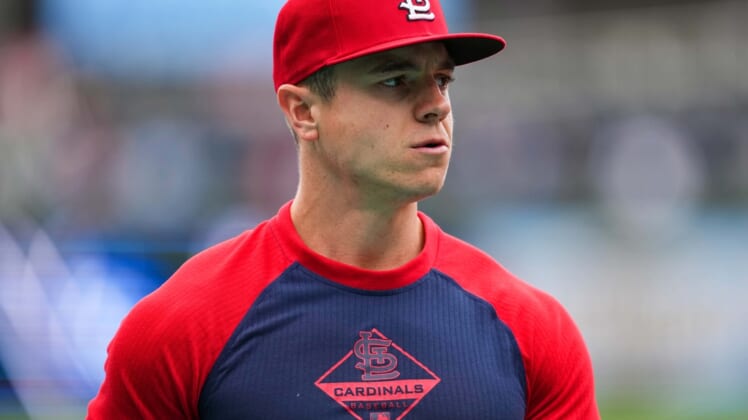 Due to soreness in his throwing shoulder, O’Neill was scratched from the Cardinals’ lineup earlier Thursday ahead of their 7-6 loss to the host New York Mets.

In his fifth MLB season, all spent with the Cardinals, O’Neill is batting .195 with two home runs and 20 RBIs in 32 games this season. He is a two-time Gold Glove award winner and finished eighth in National League MVP voting last year.

The Cardinals also called up power hitter prospect Nolan Gorman, their second-ranked prospect, from Triple-A Memphis with the plan to start him at second base in Friday’s game at the Pittsburgh Pirates.

“He’s here to play,” St. Louis manager Oliver Marmol said of Gorman. “He’s going to show what he’s able to do. … We have a need, so he’s coming to fill it.”

To make room for Gorman on the 40-man major league roster, the Cardinals moved right-handed pitcher Jack Flaherty from the 10-day IL to the 60-day IL. But Marmol told reporters that wasn’t a reflection of Flaherty’s timeline to recover from right shoulder inflammation.

St. Louis also said that left-handed pitcher Matthew Liberatore, its No. 3 prospect, will join the club and start Saturday’s game against the Pirates for his major league debut.

“Giving him the chance to come up here is something I’m looking forward to,” Marmol said. “He is coming and throwing Saturday. We’ll get a good look at him, and see where we want to go from there.”