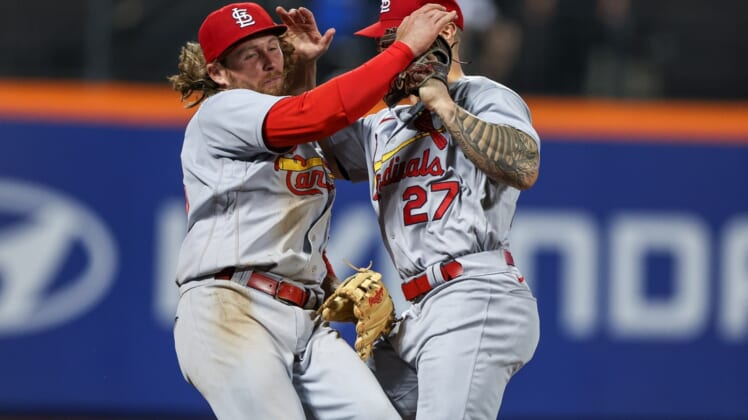 Tyler O’Neill salvaged a rough doubleheader by beating out the go-ahead infield single with two outs in the top of the ninth inning Tuesday night for the visiting St. Louis Cardinals, who beat the New York Mets 4-3 to earn a split of the twin bill.

In the opener, five Mets pitchers combined on a five-hitter in a 3-1 win.

The Mets tied the second game in the bottom of the eighth before the Cardinals took the lead in the ninth. Brandon Donovan drew a leadoff walk against Joely Rodriguez (0-2), stole second with one out and took third on a passed ball before Rodriguez walked Dylan Carlson.

Adam Ottavino entered and struck out pinch-hitter Nolan Arenado before O’Neill — who struck out three times in each game Tuesday — hit a check-swing grounder to third base. Eduardo Escobar appeared to have trouble getting the ball out of his glove before firing to first just after O’Neill crossed the bag, allowing Donovan to score the go-ahead run.

The Mets threatened in the ninth against Giovanny Gallegos, who walked pinch-hitter Dominic Smith with one out and gave up a single to Luis Guillorme. However, Gallegos struck out Mark Canha and Francisco Lindor to record his seventh save.

Ryan Helsley (2-0) earned the win despite allowing the tying run in the eighth, when he walked Lindor with one out and appeared to strike out Escobar for the third out before Escobar reached on a passed ball. Jeff McNeil laced the game-tying RBI single two pitches later.

Paul Goldschmidt had a pair of RBI doubles, including a go-ahead hit in the fifth inning, two batters after Tommy Edman laced an RBI triple. Goldschmidt finished with three hits while Andrew Knizner added two hits for St Louis.