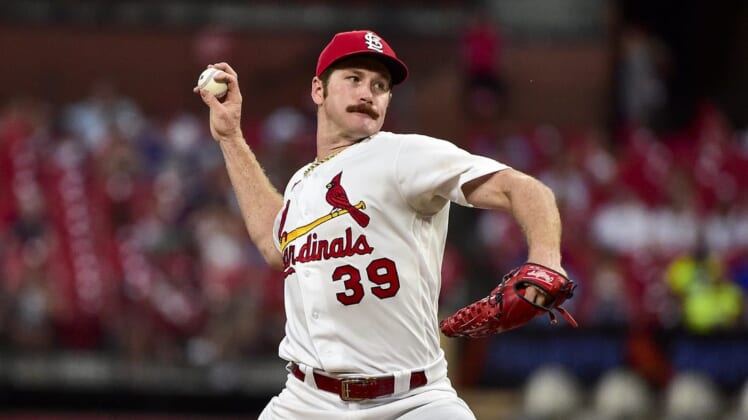 St. Louis right-hander Miles Mikolas came within one out of throwing a no-hitter on Tuesday as the Cardinals routed the visiting Pittsburgh Pirates 9-1 to complete a doubleheader sweep.

After Mikolas retired Michael Perez on a groundout and Tucupita Marcano on a flyout in ninth inning, Cal Mitchell launched a ground-rule double on 2-2 pitch. The ball that sailed just beyond the reach of lunging center fielder Harrison Bader.

Cardinals manager Oliver Marmol then removed Mikolas (5-4), who had thrown 129 pitches. Packy Naughton entered and retired Jack Suwinski on a grounder to end the game.

Mikolas allowed an unearned run, struck out six and walked one while falling just short of recording the first Cardinals no-hitter since Bud Smith accomplished the feat on Sept. 3, 2001.

Paul Goldschmidt went 4-for-4 with two homers and five RBIs for the Cardinals. Tommy Edman finished 3-for-5 with a homer and two runs, and Brendan Donovan went 4-for-5 with a double, three runs and an RBI.

The Cardinals, who took the opener 3-1, have won five of their past six games. The Pirates saw their losing streak reach nine games.

The Cardinals got to Wilson immediately when Edman smacked a homer on his first pitch of the game. After Donovan poked an opposite field single, Goldschmidt hit a two-run homer to put the Cardinals up 3-0 just 10 pitches in.

Wilson hit Bader with a pitch leading off the second inning. Bader raced to third on Edman’s bloop single into right field and scored on Donovan’s single.

Goldschmidt followed with a towering three-run homer to center field to put the Cardinals up 7-0.

The Pirates got on the board in the fourth inning when Bryan Reynolds reached on left fielder Juan Yepez’s two-base error and came around to score on a pair of groundouts.

The Cardinals pushed their lead to 9-1 in the sixth inning off reliever Anthony Banda. Donovan and Goldschmidt hit two-out singles, and Nolan Gorman drove them both home with a pop-fly double down the left field line.

There have been two no-hitters in the major leagues this year. Five New York Mets pitchers combined to no-hit the Philadelphia Phillies on April 29, and the Los Angeles Angels’ Reid Detmers stymied the Tampa Bay Rays on May 10.