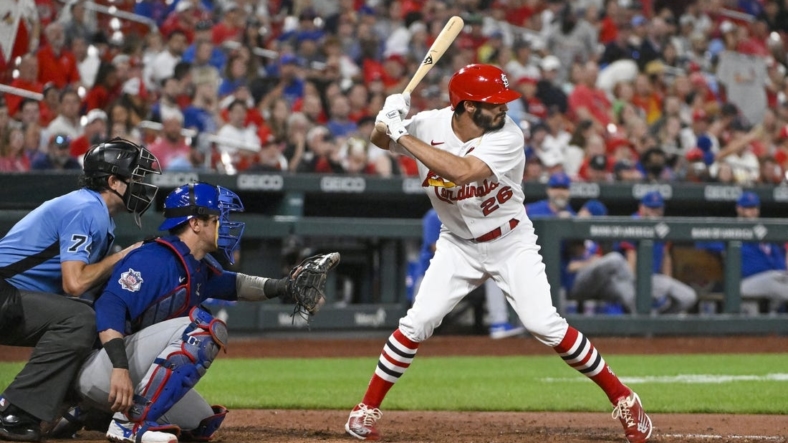 The St. Louis Cardinals will try to extend their lengthy power surge when they host the Chicago Cubs on Saturday.

Corner infielders Paul Goldschmidt and Nolan Arenado have combined for 61 homers and 194 RBIs this season to drive the Cardinals offense. Albert Pujols (eight homers, 17 RBIs in August), Nootbaar (six homers and 17 RBIs since the start of August) and Tyler O’Neill (seven homers, 22 RBIs since the start of August) also heated up as the Cardinals have rolled to a 26-8 mark since July 26.

“We have a really deep lineup,” Edman told Bally Sports Midwest after Friday’s victory. “Not just our lineup, but our bench too, our entire offensive side of the ball. We all can string together good at bats. The performance today is what we’re capable of.”

Saturday’s starting pitcher for St. Louis, Adam Wainwright (9-9, 3.09 ERA), allowed two runs on eight hits in 6 2/3 innings against the Atlanta Braves in his most recent start on Sunday. St. Louis eventually rallied to win that game 6-3, but Wainwright didn’t figure into the decision.

“For a little while, we had this thing where we fell behind (and) it felt like, ‘Oh, shoot, we’re going to lose,'” Wainwright said. “And we needed to kick that in the butt. I think we all had to look at ourselves in the mirror and realize we’re a good team.”

His one loss last month came in a 1-0 game against the Cardinals on Aug. 22. He held the Cardinals to four hits and two walks while striking out six batters in seven innings.

The only run he allowed came on Pujols’ homer on a neck-high pitch.

“He’s ‘The Machine’ for a reason,” Smyly observed afterward.

Overall Cubs starters finished August with a 3.15 ERA, which was fifth-best in the majors.

The Cubs added pitcher Jeremiah Estrada and infielder David Bote for this series as MLB rosters expanded from 26 to 28. The Cardinals added reliever James Naile and outfielder Ben DeLuzio.

St. Louis leads the season series between the clubs 11-6.