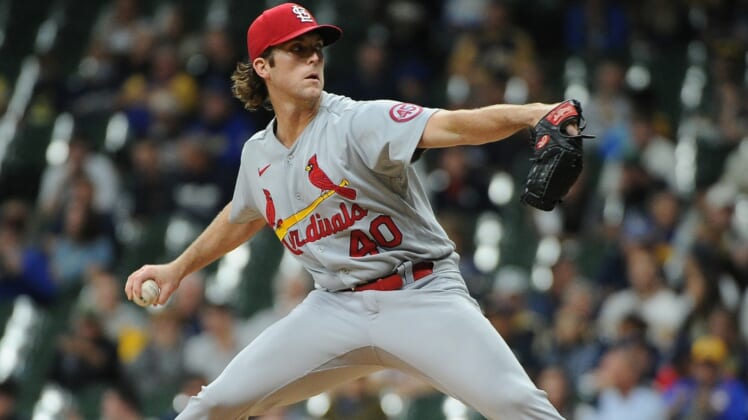 Tommy Edman drove in a run and scored another as the visiting St. Louis Cardinals edged the Milwaukee Brewers 2-1 on Tuesday for their 10th consecutive victory.

The Cardinals (81-69) have their longest winning streak since 2001. They increased their lead over the Cincinnati Reds to four games for the National League’s second wild-card slot.

The Brewers (91-60) have lost five of their past seven games, but they still lead second-place St. Louis by 9 1/2 games in the NL Central.

Cardinals starter Jake Woodford (3-3) blanked the Brewers for five innings while allowing just two hits. He struck out five and walked one.

Giovanny Gallegos escaped a bases-loaded jam in the ninth inning for his 11th save.

Brewers starter Brandon Woodruff (9-10) allowed one run on two hits in six innings. He struck out 10 batters, his fifth double-digit strikeout game of the season, and walked just one.

Edman drew a walk leading off the game and stole second base. He advanced to third base on a groundout and scored on Tyler O’Neill’s sacrifice fly to put the Cardinals up 1-0.

Woodruff retired the last 11 batters he faced, seven by strikeout. Brad Boxberger dispatched the Cardinals in the seventh inning, but Jake Cousins ran into trouble in the eighth.

Lars Nootbaar drew one-out walk, stole second base and scored on Edman’s RBI single to double the Cardinals’ lead to 2-0.

Daniel Vogelbach drew a one-out walk off reliever Luis Garcia in the bottom of the eighth, and Kolten Wong followed with a double. Willy Adames hit a sacrifice fly to cut the deficit to 2-1, but Eduardo Escobar struck out to end the rally.

Avisail Garcia hit a leadoff single in the ninth. After Lorenzo Cain grounded into a forceout, Gallegos walked Luis Urias. Manny Pina flied out, moving Cain to third, before Christian Yelich got an intentional walk to load the bases.

Pinch hitter Pablo Reyes struck out to end the game.