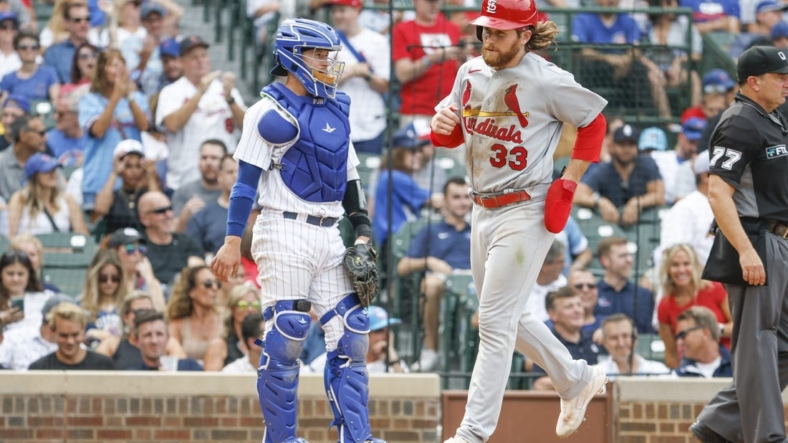 After rolling to a 22-7 record in August, the St. Louis Cardinals carry that momentum into September when they host the Chicago Cubs on Friday.

The Cardinals played 17 games in 16 days in four different time zones before getting an off-day Thursday ahead of this three-game home series, the final one between the clubs this season.

The Cardinals took two of three games at Cincinnati this week to boost their record to 35-20 against the National League Central. They maintained their six-game division lead over the second-place Milwaukee Brewers entering Thursday’s action.

But the Cardinals needed several defensive gems to outlast the Reds 5-3 in 13 innings Wednesday night.

“You’ve got to win a lot of different ways,” Cardinals manager Oliver Marmol said. “It’s easy to drop that game, go home, have an off day, and kind of reset. But to stay mentally engaged, knowing we’re here to win every single game, regardless of how it looks? We’re going to find a way. That’s makes games like that special.

“You don’t drop that and go home. You find a way.”

The Cubs finished 15-15 in August, which was the best month in their rebuilding season. They capped a span of 20 games in 19 days with a 7-5 victory over the Blue Jays on Wednesday in Toronto.

That was their 15th consecutive game against a team with a winning record.

The Cardinals will start Jordan Montgomery (7-3, 3.28 ERA) in the series opener. He is coming off his first rough outing as a Cardinal: He allowed the Atlanta Braves to score five runs on eight hits in five innings in a game the Cardinals rallied to win 6-5.

In his prior start against the Cubs on Aug. 22, Montgomery won 1-0 with a one-hit, complete game shutout. He struck out seven batters and walked nobody in his nine innings.

The Cubs will give Adrian Sampson (1-4, 3.97 ERA) another shot at the Cardinals. In his previous start against them, he allowed five runs on eight hits in 3 1/3 innings during a 13-3 loss.

Nolan Arenado and Tyler O’Neill hit homers off Sampson in that game.

Sampson is coming off a no-decision against the Milwaukee Brewers. He lasted 3 1/3 innings while allowing one run on five hits in a game the Cubs eventually lost 9-7.

Such short starting performances have put a strain on Chicago’s bullpen, which led the majors with 120 innings pitched in August.

“We just asked a lot of these guys,” Ross said after Wednesday’s victory. “I’m sure they’re toast. I’m glad they found a little bit of extra adrenaline here, we needed this win.”

Contreras is questionable for the Cubs on Friday. He left Tuesday’s game with a sore ankle and did not play Wednesday.