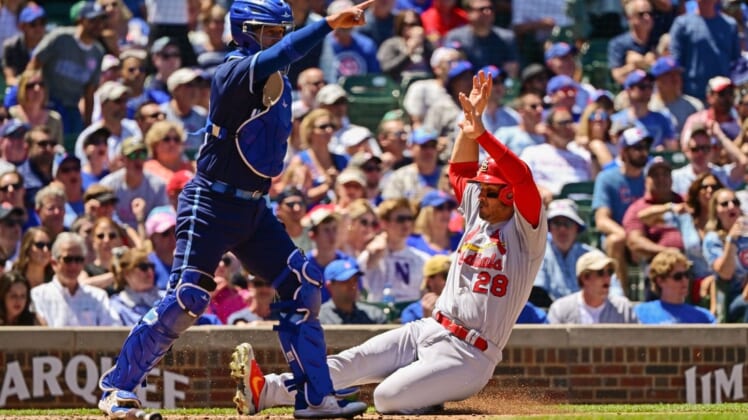 Corey Dickerson hit two solo home runs and Paul Goldschmidt and Nolan Gorman each blasted three-run homers as the visiting St. Louis Cardinals stormed back from an early deficit to rout the Chicago Cubs 14-5 on Friday.

Goldschmidt extended his hitting streak to 25 games and reached safely for a career-best 39th consecutive game. Lars Nootbaar hit a solo homer and Tommy Edman had three hits and three runs for St. Louis, which has won 10 of its last 14 games.

The Cubs grabbed an early lead in the first on Patrick Wisdom’s two-out, three-run homer against Miles Mikolas (4-3). Wisdom finished with four RBIs after hitting a run-scoring single in the seventh.

St. Louis battled back with a run in the second on Nootbaar’s two-out RBI double against Marcus Stroman (2-5).

Goldschmidt, who was named the National League Player of the Month for May prior to the game, put the Cardinals ahead 4-3 with a three-run homer in the third.

Chicago pulled even on Frank Schwindel’s run-scoring single in the bottom of the third before St. Louis moved ahead for good with five runs in the fourth.

Dickerson began the outburst with a solo homer and Andrew Knizner delivered an RBI single with two outs to give the Cardinals a 6-4 lead. Gorman capped the rally with a three-run blast, his third home run since being recalled from the minors on May 20.

Gorman, who had missed the previous three games due to lower back tightness, has six extra-base hits and 10 RBIs in his first 11 career games.

Stroman allowed nine runs on 10 hits over four innings. He walked one and struck out seven.

St. Louis stretched its lead with three runs in the sixth after loading the bases against Mark Leiter Jr. Knizner scored from third on a wild pitch, Nolan Arenado singled in a run and Goldschmidt scored on Brendan Donovan’s fielder’s choice.