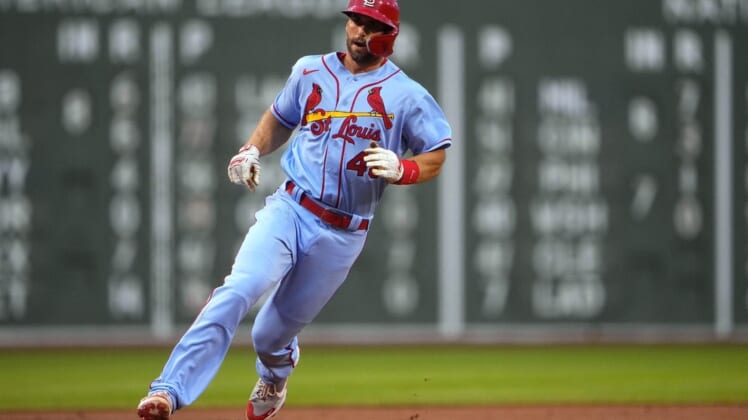 Nolan Arenado belted a two-run homer, and Nolan Gorman and Tyler O’Neill each added a solo shot to fuel the visiting St. Louis Cardinals to an 11-2 victory over the Boston Red Sox on Saturday.

St. Louis’ Tommy Edman and Paul Goldschmidt each had two-run singles and Arenado added an RBI single during a six-run sixth inning. Dylan Carlson and Andrew Knizner each had an RBI double, and Harrison Bader and O’Neill each had three hits to help the Cardinals snap a two-game losing skid.

The offense was more than enough for Dakota Hudson (5-3), who picked up the win after allowing two runs on four hits in five innings.

Bobby Dalbec had an RBI single and Kevin Plawecki scored on a bases-loaded walk for the Red Sox, who lost for just the fourth time in their last 16 games.

Goldschmidt had a two-out single in the first inning before Arenado opened the scoring by depositing a 3-2 cutter from Kutter Crawford (1-2) over the Green Monster in left field. Arenado’s homer was his 13th homer of the season and second in as many days.

The Cardinals pushed their advantage to 3-0 after O’Neill singled to lead off the second inning before coming home on Carlson’s double to the right-field corner.

The Red Sox cut into the deficit in the bottom of the inning. Xander Bogaerts extended his hitting streak to 11 games with a single, advanced to second on Franchy Cordero’s walk before coming home on Dalbec’s single to center field.

Gorman regained St. Louis’ three-run advantage after sending a 1-2 changeup from Crawford over the wall in center field. The homer was Gorman’s fourth of the season and first since June 3.

Boston trimmed its deficit to 4-2 in the fourth inning before St. Louis erupted in the sixth.

O’Neill sent a first-pitch slider from Hansel Robles over the wall in the center field. Robles allowed the next three batters to reach base before Edman greeted Hirokazu Sawamura with a two-run single to center. Goldschmidt added another two-run single two batters later before Arenado added an RBI single to right field.