Cardinals bang out 15 hits — all singles — to defeat D-backs 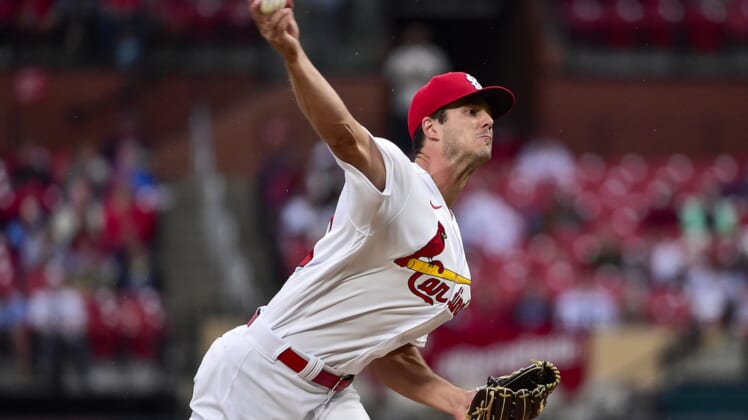 Paul Goldschmidt led a 15-hit attack — all of them singles — with three hit that produced three runs, and right-hander Dakota Hudson carried a no-hitter into the sixth inning in the St. Louis Cardinals’ 8-3 win over the visiting Arizona Diamondbacks on Thursday.

Hudson (2-1) didn’t allow a hit until Daulton Varsho’s single to right field with one out in the sixth inning. He struck out four and walked three in six innings before Aaron Brooks entered to start the seventh inning.

In the last two starts against the Cincinnati Reds and the Diamondbacks, Hudson has allowed only three hits in 12 2/3 scoreless innings with eight strikeouts and seven walks.

Goldschmidt, who went 3 for 4, got the St. Louis offense going in the first inning against Arizona starter Humberto Castellanos (1-1) by hitting a single and later scoring on a single by Nolan Arenado as part of a two-run rally.

The Cardinals added three more runs in the second inning, which began when Harrison Bader led off with a single and later, after Paul DeJong was hit by a pitch, scored on a single by Tommy Edman with one out.

A two-run single by Goldschmidt was part of a three-run sixth inning.

Arenado, Yadier Molina and Bader each had two hits.

Arizona did not get its second hit until Nick Ahmed reached on an infield single to lead off the eighth. With two outs, Pavin Smith hit his first home run of the season to cut the lead to 8-2.

The Diamondbacks rallied for another run in the ninth after Christian Walker led off with a double and scored with two outs on Carson Kelly’s single.

Arizona loaded the bases before Nick Wittgren struck out Varsho to end the game.

Castellanos lasted only two innings, allowing five runs on five hits. He walked one and didn’t record a strikeout.