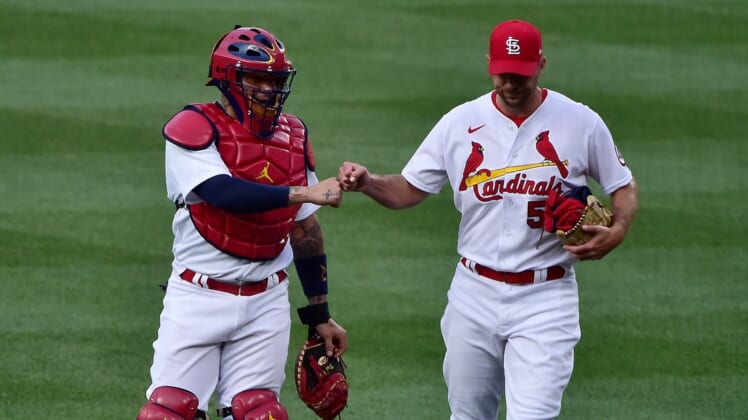 Adam Wainwright and Yadier Molina will try to become the winningest pitcher-catcher battery of all time when the St. Louis Cardinals host the San Francisco Giants on Sunday night.

Wainwright (3-3, 3.18 ERA) and Molina will bid for their MLB record 203rd victory together. They are tied with Warren Spahn and Del Crandall of the Milwaukee Braves for first.

“It’s all about the team wins,” Wainwright said. “It’s the most important stat in the game.”

Wainwright will start the finale of this three-game series at Busch Stadium after returning from COVID-19 protocol. The Giants won 8-2 Friday for their sixth straight victory and the Cardinals won 4-0 Saturday for just their second victory in seven games.

“You’re going to have to win ballgames the way we just did, where we pitch well, played good defense, made good decisions and score three, four runs,” Cardinals manager Oliver Marmol said. “There will be a stretch where we hit. But you have to win ballgames when you’re not feeling great and that’s what we did today.”

In his most recent start on May 4, the 40-year-old Wainwright blanked the Kansas City Royals on one hit over seven innings in a 10-0 victory.

“When I’m making the other team put the ball in play and not walking five guys and trusting the best defense in the big leagues, I’m going to be fine,” Wainwright said.

The Giants will counter with left-hander Carlos Rodon (4-1, 1.80 ERA), who has allowed two runs or fewer in all six of his starts this season. But Rodon has worked deeper than six innings into a game just once.

“It’s something I’ve started to talk to Carlos about. It is, in part, channeling emotion, channeling frustration,” Giants manager Gabe Kapler said. “But I think at least as much it’s about conserving energy. It takes of effort a lot to be Carlos Rodon on the mound. Every pitch that he delivers is full effort, trying to throw the ball as hard as he can by guys. With that I think comes the responsibility to make sure that you’re not expending energy where you don’t need to.”

Rodon did not face the Cardinals when the teams met last weekend in San Francisco. He is 1-2 with a 4.15 ERA in three career starts against them.

In his most recent start, Rodon earned the victory as the Giants defeated the Colorado Rockies 8-5 on Monday. He allowed two runs on six hits and two walks in six innings.

The Giants made a trade Saturday ahead of Tommy La Stella’s return from his rehabilitation assignment. San Francisco traded utility player Mauricio Dubon to the Houston Astros for catcher/first baseman Michael Papierski.

“I thought the way (Dubon) played this season and the person that he was in our clubhouse this season was a reason that the Astros were interested in him,” Kapler said. “Because he really came together as a man, as a teammate and as a baseball player.”

To fill a near-term need, the Giants activated newly acquired infielder Donovan Walton and started him at second base on Saturday. He had one hit in four at-bats.