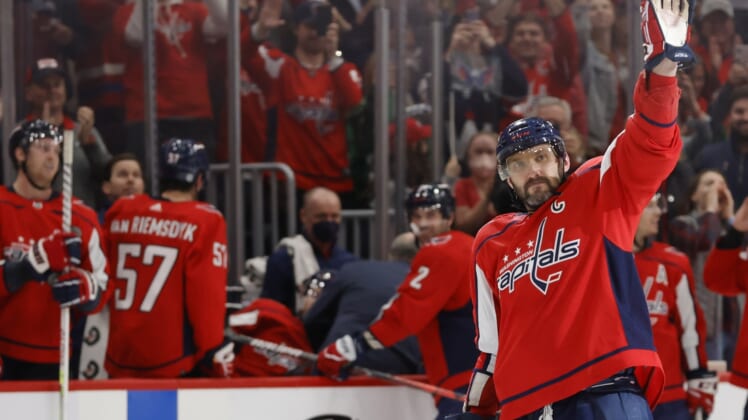 The Columbus Blue Jackets will continue their quest for a wild-card playoff spot when they host the Washington Capitals on Thursday.

Columbus trails Washington by 11 points for the second Eastern Conference wild-card spot with 21 games remaining. Both teams are rolling. The Capitals have earned points in each of their past six games (5-0-1), and the Blue Jackets have won three straight.

The hosts will be trying to extend that winning streak as they play the second of back-to-back games after recording a 4-1 road win against the Ottawa Senators on Wednesday.

Jack Roslovic scored twice for Columbus, Sean Kuraly and Eric Robinson also scored and Patrik Laine and Zach Werenski each had two assists. Elvis Merzlikins made 30 saves as the Blue Jackets pulled away after a 1-1 first period.

“It was kind of a weird game a little bit,” Werenski said. “I thought we played well in the first. It’s a tie game after, but I thought we were patient. Elvis made some really big saves.”

Forwards Jakub Voracek and Justin Danforth returned to action for Columbus. Voracek missed one game due to a knee injury, while Danforth was out for two games because of a lower-body ailment.

Blue Jackets goalie Joonas Korpisalo could get the start Wednesday.

In his return from a lower-body injury that kept him out for more than five weeks, Korpisalo allowed six goals on 33 shots in a loss to the New York Islanders on March 10.

The Capitals come in off an emotional 4-3 shootout win against the New York Islanders on Tuesday. Alex Ovechkin scored his 767th NHL career goal, passing Jaromir Jagr for sole possession of third place on the all-time list.

The 36-year-old forward has 37 goals this season and shows no signs of slowing down as he pursues Wayne Gretzky (894) and Gordie Howe (801).

The Islanders tied the game late in regulation, but Anthony Mantha, who scored in the first period, added the deciding goal in the shootout.

“I would like to get a lead and move on from it, but that’s the hand that was dealt,” Laviolette said. “You got to give the guys credit. I thought every minute we played in the game we put more of our best foot forward. … Great effort in the second half of that game.”

Evgeny Kuznetsov had two assists, including one on Ovechkin’s historic tally, giving him four goals and five assists in a six-game point streak.

In a year when injuries and COVID-19 have forced the Capitals to rely heavily on youth at times, rookie Axel Jonsson-Fjallby scored to become the ninth different Capitals rookie this season to record his first career goal.

Special teams continues to boost Washington. New York did not score on its only man-advantage, and the Capitals have killed off 31 of their past 34 opposing power-play opportunities dating back to Feb. 13.

Washington is playing the opener of a back-to-back set before visiting the Carolina Hurricanes on Friday. Columbus will finish a two-game homestand when the St. Louis Blues come to town on Saturday.