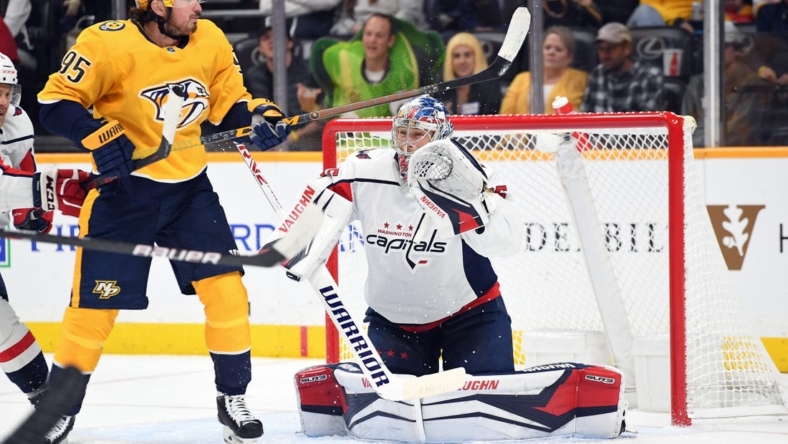 Darcy Kuemper made 34 saves for his first shutout of the season and the visiting Washington Capitals defeated the Nashville Predators 3-0 on Saturday night.

Beck Malenstyn and Aliaksei Protas scored for Washington, which was coming off a 2-0 shutout loss at Dallas on Thursday. Alex Ovechkin added his 49th career empty-net tally, and Kuemper earned his 26th career shutout.

Juuse Saros made 32 saves for the Predators, who were blanked for the first time this season after scoring six goals in a Thursday win against the St. Louis Blues.

The Capitals went 0-for-3 on the power play, while the Predators were 0-for-5. Washington has killed off 15 consecutive opponent power plays.

Capitals forward T.J. Oshie and defenseman John Carlson left the game with lower-body injuries in the first period and did not return.

Saros stopped Anthony Mantha in alone at 11:08 of the first period and Lars Eller was unable to knock in the rebound.

Kuemper kept it scoreless early in the second period when he made a pair of acrobatic saves on Filip Forsberg alone in front.

Malenstyn gave the Capitals a 1-0 lead at 12:49 of the second period. After a pair of Predators collided in the Nashville zone, Nic Dowd grabbed the loose puck in the right circle and centered to Malenstyn, who beat Saros from the slot.

It was only the third time in nine games that Washington scored first.

Protas made it 2-0 at 6:44 of the third period. Saros made a save on a deflected shot from the left circle, but couldn’t prevent a rebound and during the ensuing scramble in front, Protas knocked the puck in.

The Predators pulled Saros with 4:09 left in the third period, but the Capitals made it 3-0 with 2:45 left when Dmitry Orlov sent the puck down ice, Ovechkin got to it in the Nashville zone and scored.