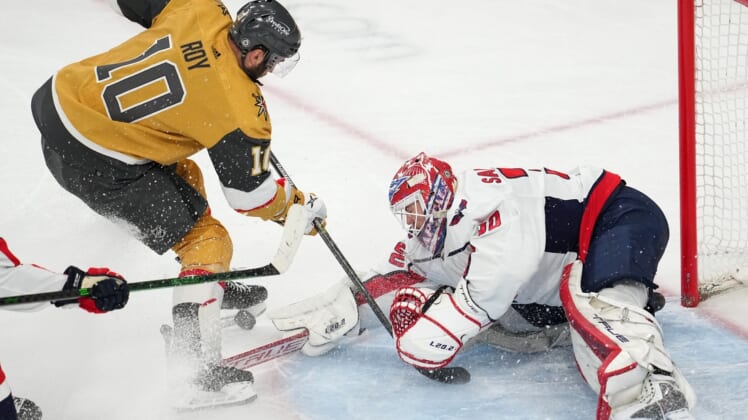 Shea Theodore scored at 2:09 of overtime as the Vegas Golden Knights overcame a history-making night by Alex Ovechkin to keep their playoff hopes alive with a 4-3 victory over the Washington Capitals on Wednesday night in Las Vegas.

Theodore skated in from left wing and cut in front of the net, where he beat Ilya Samsonov with a backhand on the glove side for his 14th goal of the season and third overtime winner.

Vegas (42-31-5, 89 points) closed within two points of the Dallas Stars for the final Western Conference wild-card spot. The Golden Knights are also just three points behind the third-place Los Angeles Kings in the Pacific Division.

Ovechkin had two goals and an assist. His second goal gave him 50 in a season for the ninth time in his career, tying Wayne Gretzky and Mike Bossy for the most 50-goal seasons in NHL history.

Theodoe and Evgenii Dadonov each had a goal and an assist, and Alec Martinez and Chandler Stephenson added goals for Vegas. Logan Thompson, who took over for starter Robin Lehner at the beginning of the second period, finished with 13 saves. Lehner stopped 12 of 13 shots.

Evgeny Kuznetsov had a goal and an assist for Washington (43-23-11, 97 points), which moved into a tie with idle Pittsburgh into third place in the Metropolitan Division. Samsonov made 26 saves.

Washington then took a 1-0 lead at the 6:18 of the first period. Ovechkin’s slap shot from above the left circle trickled through Lehner’s pads and near the goal line, where Kuznetsov tapped it into the net for his 24th goal of the season.

Vegas tied it at 13:51 of the first. Martinez fired a shot from the left point through traffic that bounced through Samsonov’s pads for his second goal of the season.

The Capitals, who had a late first-period score by John Carlson wiped out after a coaches’ challenge video review showed the play was offside, regained the lead 2-1 early in the second period. Ovechkin fired a trademark one-timer from the left circle inside the near post off a Kuznetsov pass.

Dadonov tied it at the 2:05 mark of the third period when his wrist shot went under Samonov’s left arm for his 20th of the season.

Nic Dowd was then called for a tripping penalty and Stephenson then gave Vegas its first lead with just its second power-play goal in its last 28 attempts. He redirected a Max Pacioretty pass past Samsonov for his 19th of the season at 2:54.

Ovechkin tied it at the 13:36 mark when he took a Dmitry Orlov stretch pass and blasted a slap shot from the top of the right circle past Thompson’s glove side for his 50th goal of the season.