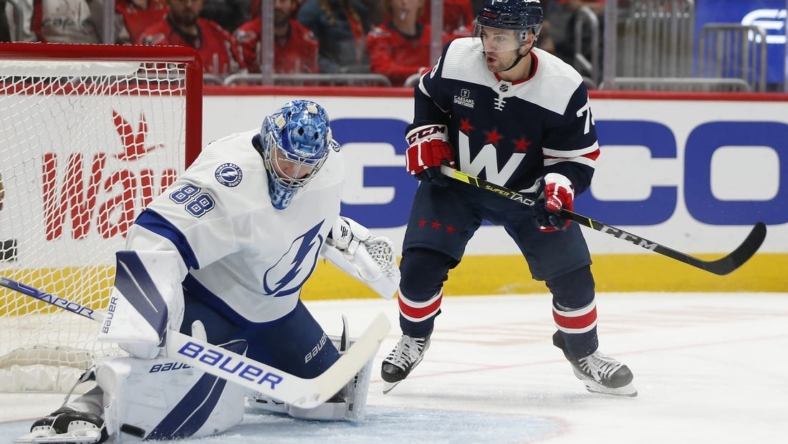 Carlson, a defenseman, set up left winger Milano on a breakaway for the milestone point. Milano scored again on a pass that went in off the Lightning’s Steven Stamkos in the third. Carlson’s fellow blue-liner Nick Jensen had an assist for his 100th career point.

Washington finished its season-long homestand with a 2-2-0 mark and won for the second time in the past seven games (2-3-2).

In the first match of a home-and-home set, Kuemper — who beat the Lightning as a member of the Colorado Avalanche in last season’s Stanley Cup Final — stuffed Kucherov’s breakaway attempt early.

Washington took the lead when Lars Eller sent a blind, cross-ice pass through to the right circle right on the tape for Mantha, who flipped in his fifth goal at 10:32.

Bad blood developed in the second when Washington’s Nicolas Aube-Kubel hit Cal Foote high, leaving the Lightning defenseman bleeding and sending him to the dressing room. Aube-Kubel was assessed a five-minute major for a hit to the head and ejected with a match penalty.

But Washington killed the penalty, and to make matters worse, Milano — serving the match penalty — bolted out of the penalty box and in for a breakaway at 7:03. Carlson’s stretch pass to set up Milano was the only assist.

Just over seven minutes later, Protas cleaned up a rebound of Jensen’s long blast for his third goal to put Washington up 3-0.

In the final frame, Sheary helped put the game away when he streaked through the middle of the offensive zone after a poor Lightning line change and potted his fifth marker at 4:53.

After Perbix’s tally at 12:09 broke up Kuemper’s shutout bid, the teams had multiple players fight as tempers heightened in the chippy matchup that will be revisited Sunday in Tampa.