Capitals to take on Flyers with ‘good feeling’ 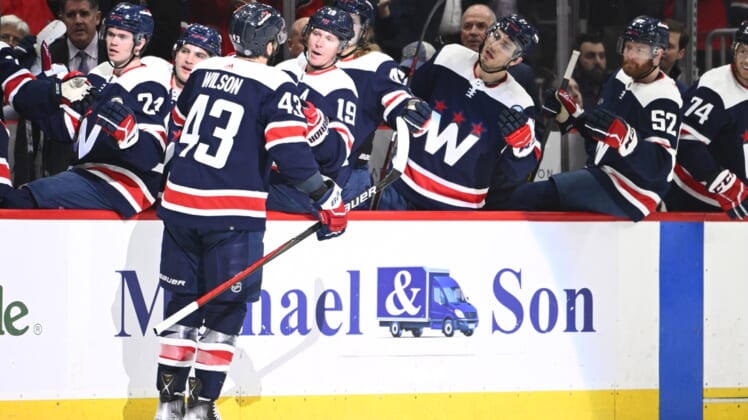 The Washington Capitals have not officially switched into postseason mode, but they’re getting in some decent practice runs.

The Capitals have 10 games left before the start of the Stanley Cup playoffs, and next up on the regular-season schedule is the visiting Philadelphia Flyers on Tuesday night.

Washington is coming off a successful week in which it beat the Tampa Bay Lightning, Pittsburgh Penguins and Boston Bruins, all of whom are above Washington in the Eastern Conference playoff pecking order.

“We put together three really strong games with various challenges, some guys coming in and out, and I just think it was a really good team effort,” Washington center Lars Eller said. “We’ve got a good feeling in the room right now.”

Washington (40-22-10, 90 points) currently is in the second wild-card spot in the East, 15 points ahead of the nearest pursuer, and four points behind the Penguins for third place in the Metropolitan Division.

After facing five straight teams that are bound for the playoffs, the Capitals finally will meet a team that’s already been eliminated from contention.

The Flyers (23-38-11, 57 points) haven’t won two games in a row in over a month, although they’ve won two of three against Washington this season.

Philadelphia is coming off a 5-3 loss to the visiting Anaheim Ducks on Saturday. The Flyers scored two goals in the first 2:28 but couldn’t hold on for a second straight win.

“Got off to a hot start and, just assuming, maybe we thought it was going to be point night,” Flyers interim head coach Mike Yeo said. “Wanted it easy in the second period.”

Yeo said the Flyers were less physical than the Ducks, which affected their execution, especially coming through the neutral zone.

“I thought just one-on-one battles and the hardness of our game was lacking,” he said. “We let them take the momentum and run with it.”

The Flyers also will look to improve on their power play, which is 1-for-28 in the past 10 games.

Bobby Brink, a second-round pick of the Flyers in the 2019 NHL Draft, is expected to make his NHL debut against the Capitals. He signed an entry-level contract on Sunday and practiced with Philadelphia on Monday.

Brink just helped lead the University of Denver to its first national title in five years at the Frozen Four this past weekend. He led the NCAA in points (57) and assists (43) this past season.

The Capitals continue to benefit from the usual production from players such as Alex Ovechkin and Evgeny Kuznetsov, but they’ve also received better-than-expected contributions from several other players, including Tom Wilson, who has a goal in each of the past two games to set a career high with 23 this season.

The rugged winger who’s been better known for his physical altercations on the ice also has reached 50 points for the first time in his nine years with Washington.

“He’s been really strong the entire year,” Washington coach Peter Laviolette said. “I know he’s on a good run right now. There’s the really good moments through the course of the year, and then there’s some plateaus or whatever, but he’s been pretty consistent with the way he plays the game.”