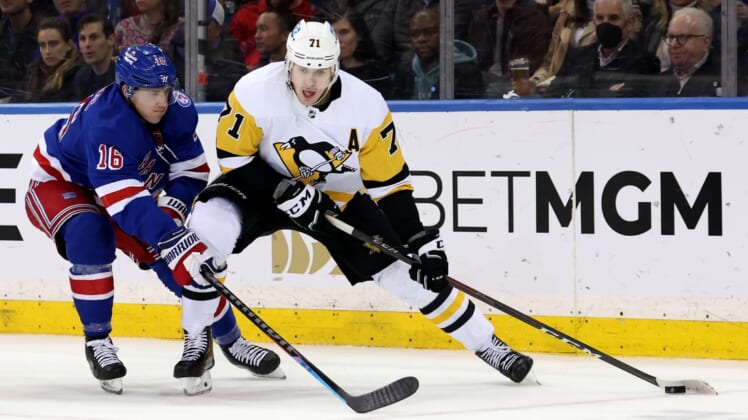 Tom Wilson scored a third-period tiebreaking goal Saturday to give the visiting Washington Capitals a 6-3 win over the slumping Pittsburgh Penguins and important points in the standings.

Wilson, on a blast from the left circle off goaltender Tristan Jarry’s glove, broke a 3-3 tie at 11:35 of the third period, tying his career high with his 22nd goal.

Evgeny Kuznetsov scored an empty-net, short-handed goal with 1:41 left for the Capitals, and Martin Fehervary added an another empty-netter with 27 seconds left.

Marcus Johansson, Dmitry Orlov and Alex Ovechkin also scored for the Capitals, who have won two in a row.

Rust opened the scoring in an action-packed first period. Just 45 seconds into the game, after Ovechkin turned the puck over in his end, Evgeni Malkin from deep got the puck to Jake Guentzel, whose whack was stopped. Rust jumped on the rebound, making it 1-0 and giving Malkin the 700th assist of his career.

Washington responded when the puck went in off Johannson’s leg just 16 seconds later, and then Orlov gave the Capitals a 2-1 lead at 7:24 of the first period on an uncontested far-side slap shot from the left circle.

The Penguins tied it at 18:34 of the first after another turnover, by Anthony Mantha behind the net. Evan Rodrigues’ shot was stopped before Carter came sliding in and got the puck to squirt between Samsonov’s right skate and the post.

Then with 25.7 seconds left before the first intermission, Boyle reached around the front of Samsonov and scored on a sharp-angle shot, giving Pittsburgh a 3-2 lead.

Ovechkin tied it at 4:49 of the second during a five-on-three power play, driving home a signature blast from the left circle.

The tightly contested game stayed knotted until Wilson’s goal with 8:25 remaining in the third period … and immediately after the goal, Pittsburgh’s Jason Zucker and Washington’s Trevor van Riemsdyk went after each other.